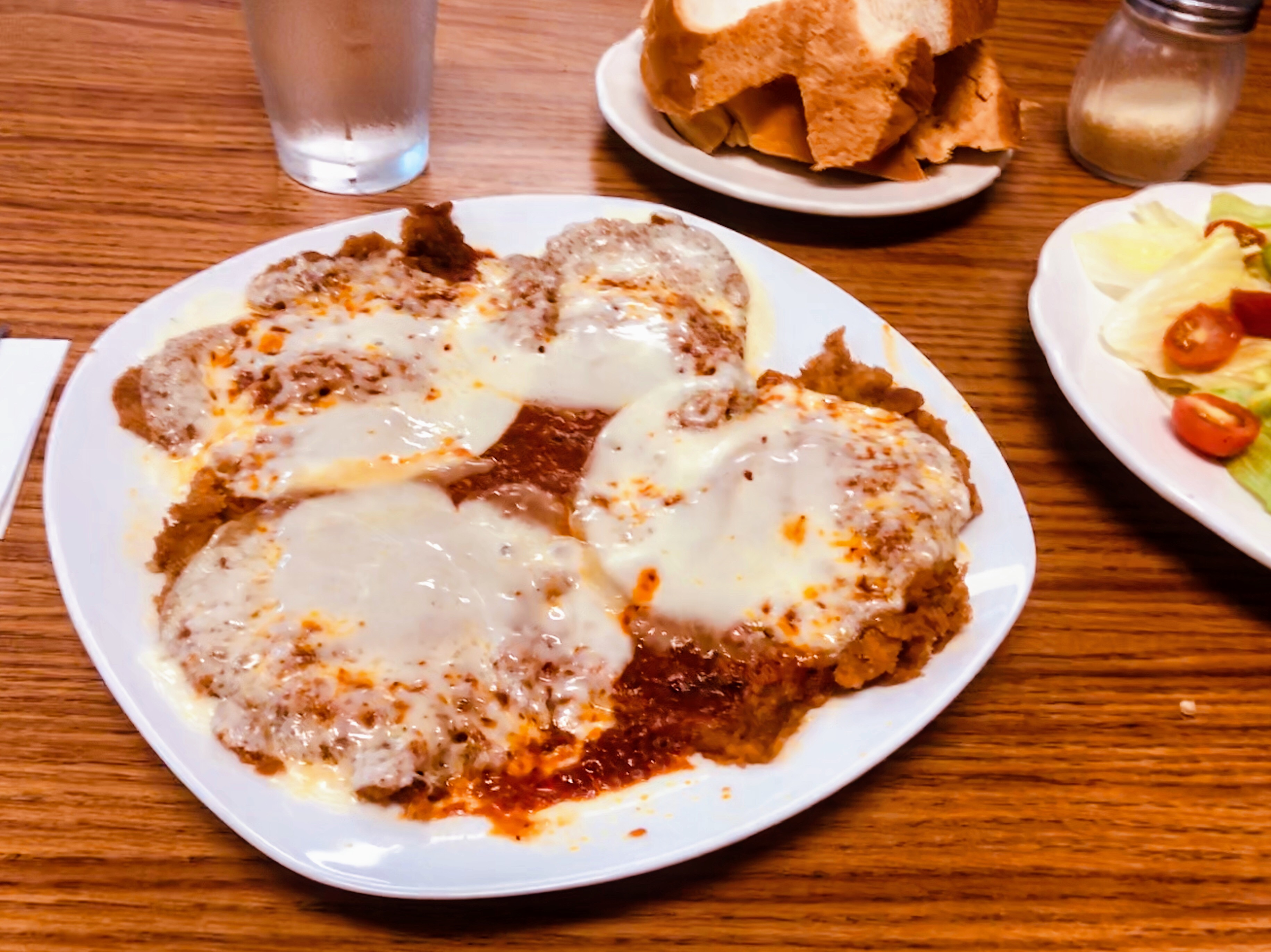 The Eggplant Parmesan at the Allegro Café in Hartford 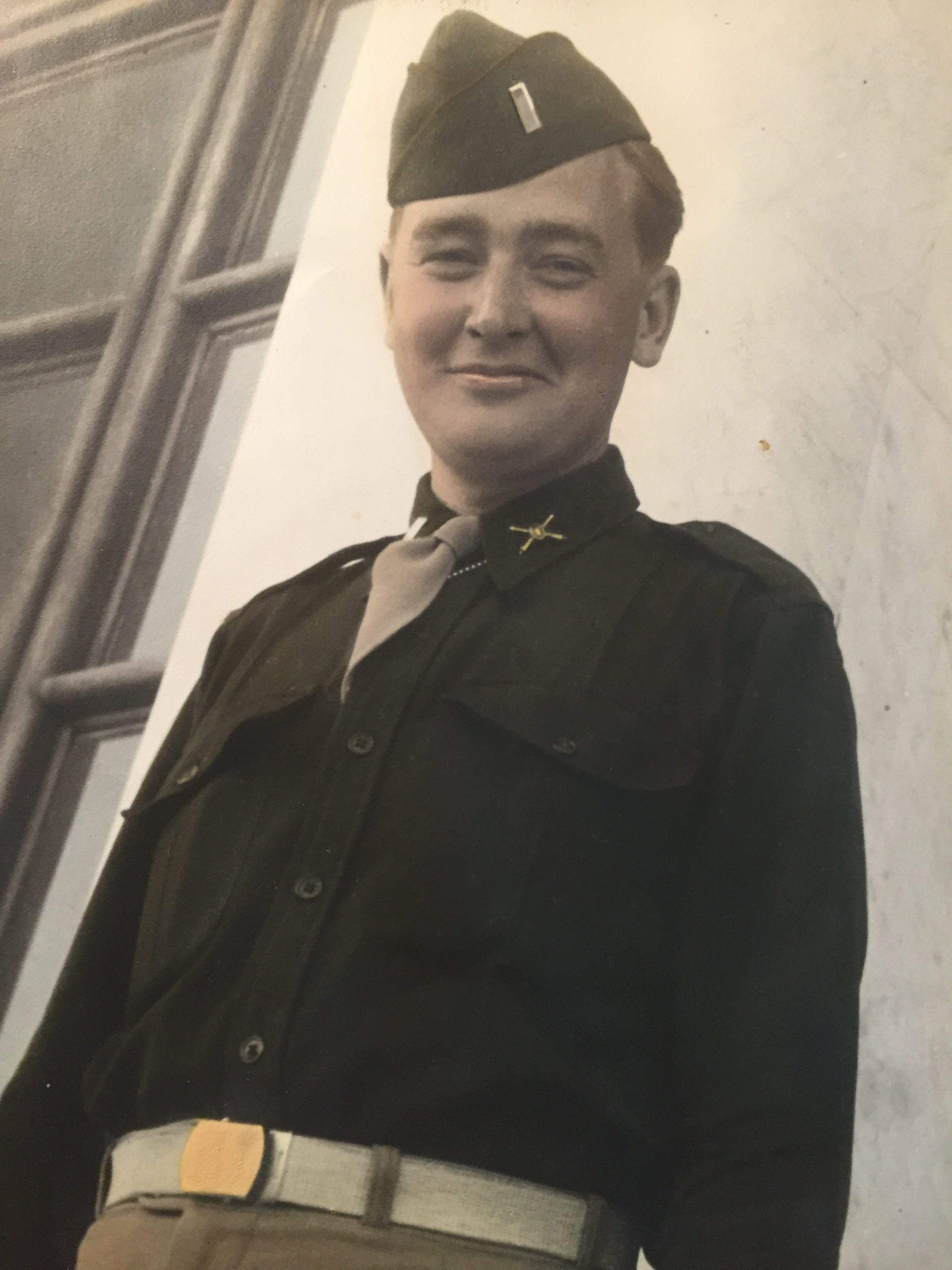 My Father at the Liberation of Rome in WWII

My father spent a year in Italy in WWII in the mountains between Naples and Rome.  He would frequently tell us that he lived on eggplant that year.  An exaggeration, of course, but I never new whether it expressed a love of eggplant or a lack of meat.  Growing up I was inclined to believe it was the latter; now I'm pretty sure it was the former.  You see, I knew my mother loved my father because she tried to make my father eggplant.  And I knew my father loved my mother because he would eat my mother's eggplant.

It wasn't until I was in college that I discovered that if eggplant is cooked right, it is not only edible, but really delicious.  I was sharing a house with a bunch of friends, including an Italian-American girl named Cathy Ciafalo with roots in South Philly and Sicily.  She taught me how to make Eggplant Parmesan in the Sicilian style: slices of fried eggplant topped with a mild red sauce and provolone cheese, then put under a broiler to melt the cheese.  The best version I've ever had of this style of Eggplant Parmesan is the one at the Allegro Cafe in Hartford that is pictured above.

I spent three weeks in Northern Italy in late June and early July. I didn't have any Eggplant Parmesan while I was there, as it is a Southern Italian dish, but I thought a lot about my father on the trip and resolved to make some when I got back.  It had been awhile since I had made it, so I decided to take a fresh look.  Fortuitously, I got back to find that the Wooster Square Cooks, a Facebook Group that focuses on Italian cooking, was discussing Eggplant Parmesan when I got back.  Should it be sweated or not?  Should it be peeled or not?  How thick should the slices be?  Coated or uncoated?  With flour, bread crumbs, or both?  Baked or fried?  If fried, over moderate heat in olive oil, or over high heat in vegetable oil?  Topped with a rich red sauce or a mild one?  Mozzarella cheese or provolone? [Parmesan cheese was incidental, as the name of the dish does not derive from that cheese, but from the village of Parma in Sicily.]

I tried a lot of these different combinations, and then I went back to the Allegro Café in Hartford.  Not having been there for 35 years, I worried that their Eggplant Parmesan had taken on mythic dimensions in my mind and that it wouldn't be as good as I remembered. No worries.  Still awesomely good and still being made by the same family who ran the place 35 years ago.

The Allegro Café peels their eggplant.  They do not sweat it. They slice it thinly (less than 1/4 inch), dust it with flour, and deep fry it in vegetable oil at high heat.  Then they spread some mild red sauce* on a plate, arrange a few slices on the plate over the sauce, top with some more of the sauce, then top each slice of eggplant with a slice of provolone and then put the plate under the broiler till the cheese melts.  No Parmesan at all.

So that's what I did too, but with a little sprinkle of Parmesan on top after the broil. 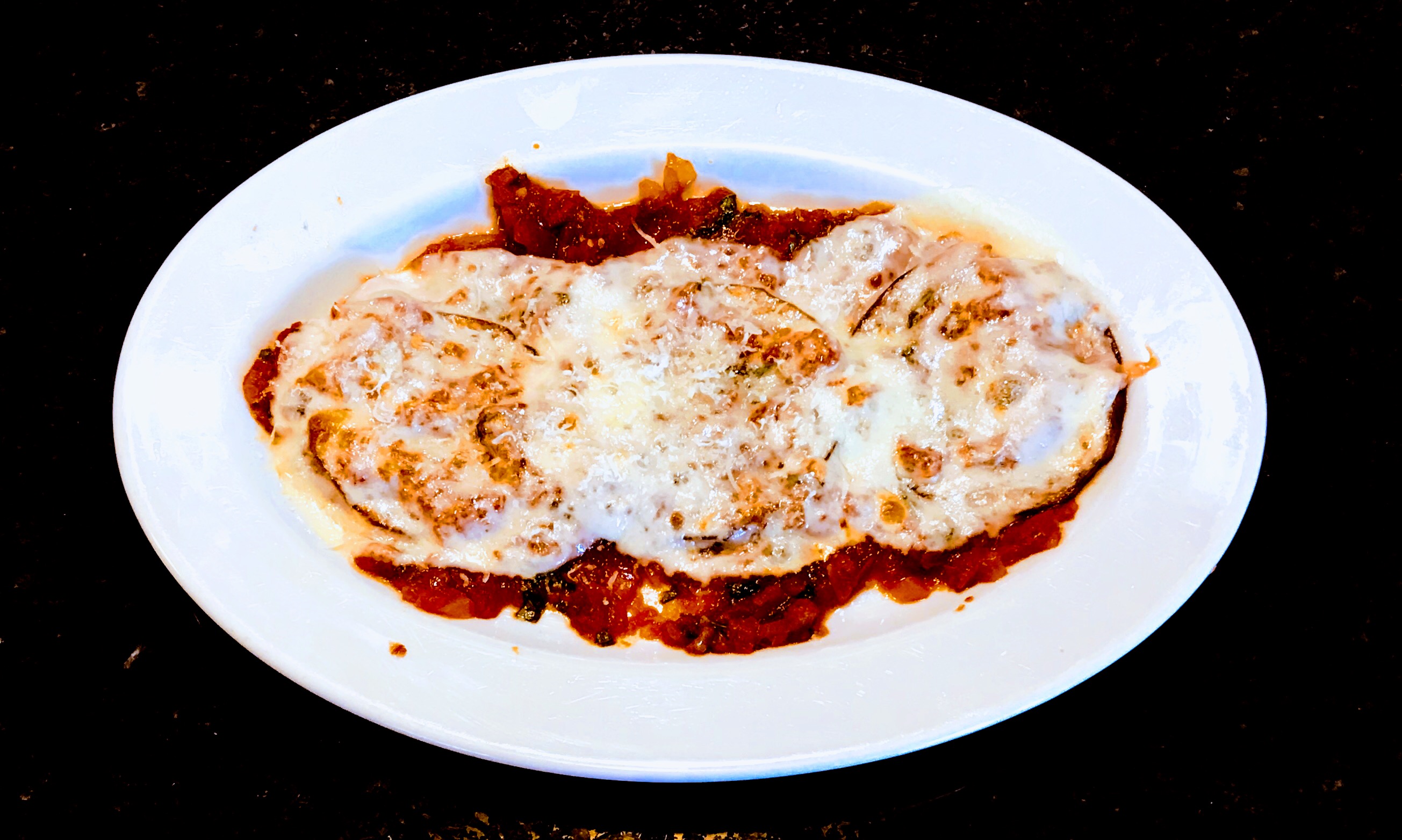 I really love this dish.  Simple, not fussy, each ingredient allowed to sing for itself.  I have watched every episode of the tv series Chef's Table, where they profile some of the best chefs in the world. In almost every episode, they ask the chef the secret of great cooking, and almost every chef says the same thing:  "Buy the best ingredients you can and don't f**k them up." Italians really take this advice to heart.  Coming up:  blogs inspired by my three weeks in Northern Italy.

*I used the recipe in Food Lab for a simple red sauce, which is 2 T of EVOO and 2 T butter heated till the butter stops foaming, then a finely diced medium onion sautéed 3 minutes till soft, then with 2 minced medium garlic cloves, 1/2 tsp of oregano and a pinch of red pepper flakes for another minute, then with a 28-ounce can of whole Muir tomatoes and a stem of fresh basil, brought to a boil, and then simmered about 30 minutes.