This is a final farewell weekend to summer and farmers markets, as I cook up the last of my locally grown produce.  I plan to make celeriac-potato pancakes, and to take a final run at the Grail, my quest to reprise a Parisian Curried Pumpkin Mussel Soup, this time using a mix of sugar pumpkin, acorn squash and butternut squash and some added turmeric to try to get the color just right.  Here I use two beautiful, locally-produced eggplants to make Chermoula Eggplant from the Jerusalem cookbook.  This Chermoula Eggplant recipe is my favorite way to eat eggplant, and one of the dishes that I've cooked most often from Jerusalem. 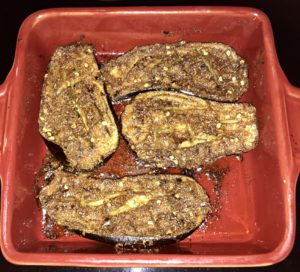 These are then topped with a sweet and salty bulgur salad and drizzled with cold yogurt and a little more olive oil: 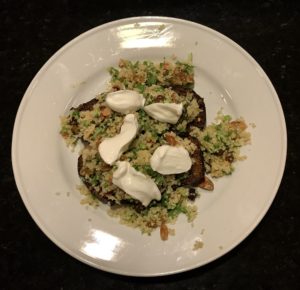 This is a classic Ottolenghi vegetarian masterpiece of textures and flavors, good to the last scrape: 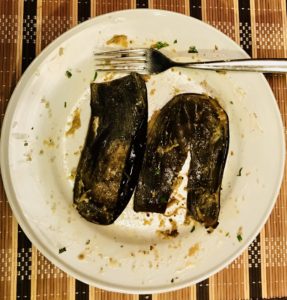