So one evening, Marilyn and I were walking from Sacre Coeur down the back side of Montmartre looking for a place to eat a light supper…

We found a little hole-in-the-wall restaurant, where I ordered the curried pumpkin mussel soup that was the daily special.  It was amazingly, wonderfully awesome, a stunning combination of flavors that I had never experienced before, and I have been trying to recreate ever since.  It is my pumpkin soup Holy Grail. 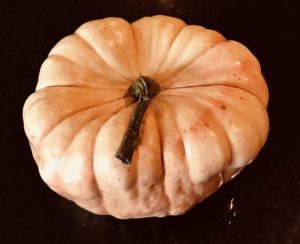 The farmer told me that the seeds were deliberately bred by Burpee seeds in recognition of Breast Cancer Awareness Month, which is October, pumpkin time.  Kinda cool.  She said it was a “pie-type” pumpkin that I could cook with.  So I bought it and thought I’d give the Quest another shot.

Here is the initial result: 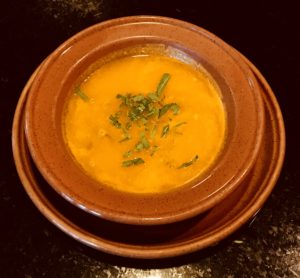 This is simply baked pumpkin, the broth that the mussels were steamed in (olive oil, white wine, onion, garlic, fresh thyme, fresh ground black pepper), fish stock, lemon juice, a little curry powder and cayenne, and the mussels, with chopped tarragon to garnish. This was from a combination of two recipes on the internet (Carol Peck and recipes2share).  It had the right color, but was a little thin, probably because I was making a half recipe and added too much fish stock.  When I do it again, I might leave out most or all of the fish stock.  In the recipe below, I reduced the amount of fish stock by half, and added a 4th cup of wine to the steaming liquid.  To thicken the soup I made today, I added an egg yolk and some heavy cream to it, and got this: 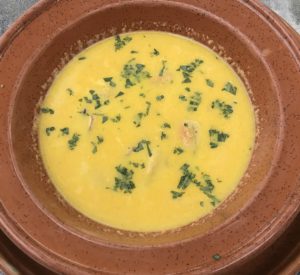 This was the closest yet to what I remembered from that Montmartre bowl in taste and texture, but not the right color, and the one I remember had more intensity. And the pumpkin in this one wasn’t fully broken down enough into a smooth puree.  It might have been the pumpkin variety, or its ripeness or Carol Peck’s crazy baking method (in a roasting pan with water covered with aluminum foil), which I followed.  Next time I will just go back to cooking it uncovered on a baking sheet (which is what I put in the recipe below), or maybe even go back to sweating (slowly cooking) the pumpkin instead of baking it.  And would just use a regular sugar pumpkin rather than this pretty mutant (a carving pumpkin would be too tangy for this soup). The recipes2share method was to sweat the pumpkin with chopped onion, which would sweeten and thicken the soup and give another layer of flavor.  I want to try that too.

In spite of not quite being the Grail, this soup today was delicious, better than any previous attempt. What I learned today is that the key is to use the wine/garlic/onion/thyme broth from steaming the mussels, plus fish stock to supplement as needed, as the liquid base for the soup, versus chicken stock or something else.  Also critical to not overcook the mussels, just steam them till they open.  That only took 3 minutes for me.  One of the recipes called for 5-8 minutes.  Mine would have shriveled up if I cooked them that long.

The Quest continues.  I have already told a friend who is coming for dinner on Saturday that she is going to be a guinea pig for my experiments with curried pumpkin mussel soup.  Expect an update.

Bake the pumpkin on a baking sheet for 1 hour until the pumpkin is tender.  Allow to cool, then cut in half and remove the seeds and threads, and the tough bottom and the stem.  Peel and cut into chunks.

Heat the oil over high heat in an 8-quart stock pot.  Add the onions, garlic, thyme, pepper and mussels,  Pout over the wine, cover and cook the mussels until they just begin to open.  Check at 3 minutes, and then every minute.  Be careful not to overcook, as the mussels will shrivel up.  Discard any mussels that haven’t opened (and find another fish store if you do).  Remove the rest of mussels and allow to cool, then pull them from their shells, trying not to break them, and set aside in a bowl.  Strain and reserve the steaming liquid, as this will be the heart of the soup.

Put the steaming liquid with the pumpkin in a 4 to 6 quart pot, and puree with an immersion blender (or puree in batches in a food processor).  Add the fish stock a cup at a time until the soup is creamy, but not too thick. This is a matter of taste, but it’s much easier to add stock than to try to thicken it after you’ve added too much (an egg yolk and heavy cream works).  Add a pinch of curry powder and a pinch of cayenne pepper.  Bring to a boil over medium heat, then reduce the heat and simmer for five minutes, stirring occasionally.  Adjust seasoning (it will probably need salt), and finish with the lemon juice.  Stir the mussels into the soup just before serving, or just put them into the serving bowls before the soup, if they’re still warm.  Garnish each bowl with some of the tarragon.