I love fish.  I love fennel.  Lucky for me, fish and fennel love each other.  The anise taste and crunch of fennel perfectly complements the flavor and texture of many types of fish.  Below are recipes for Fennel Crusted Seared Yellow Fin Tuna with Fennel Slaw, Broccoli Rabe and Olive Oil Mashed Potatoes (inspired by the version of this dish on the fall menu of Liv’s Oyster Bar in Old Saybrook, CT), and for Grilled Fish with Fennel, Peppadews and Picholine Olives (inspired by a recipe using cherry tomatoes instead of peppadews in Alfred Portale’s 12 Seasons Cookbook).

1/2 tsp kosher salt (tastes better than iodized salt, we get more than enough iodized salt in processed foods to get our iodine)

2 T extra virgin olive oil (generally you want EVO for salads and regular olive oil or a less expensive EVO for cooking…I have found an EVO, Kreta Reserve, that has great character for salads, but is reasonably priced enough to cook with…will blog about it separately)

1/2 tsp sea salt (tastes better than kosher, but is more expensive, so I don’t cook with it, as the flavor difference gets lost with heat)

4 red (or other waxy) potatoes, peeled and diced

For the tuna:  Cut the tuna steak lengthwise in three or four equal size logs, each 1 inch wide by 1 inch high.  Grind the fennel seed, white pepper and salt together coarsely in a spice mill or a coffee grinder.  Put on a plate and coat the tuna logs on all sides.  Heat a cast iron skillet very hot and then coat the bottom with the oil.  Sear the tuna on all four sides, about 2 minutes total, just to slightly darken the crust.  You want the final result to essentially be sashimi under the crust.  Cut the logs into chunks about 1 inch thick.

For the fennel slaw: Trim off top of fennel bulb, but leave a little to use as a handle with the mandoline and carve out the tough bottom.  Cut in half lengthwise, then holding the top in your hand, slice the bulb crosswise on the thinnest setting of a mandoline (if you don’t have one, buy one…they’re cheap and essential for making very even, very thin slices of veggies).  Slice cherry tomatoes as thin as possible (have to use a knife for this).  Combine the sliced fennel and cherry tomatoes with the olives and olive oil.  Salt to taste.

For the broccoli rabe:  Cook in a pot of boiling water for two minutes, drain, then saute with garlic in olive oil till garlic just starts to brown, then lower heat and simmer for 10 minutes, or until you finish doing everything else,  Do the broccoli rabe first and let it sit there slowly cooking while you do the other stuff, as contrary to the generally true conventional wisdom about not overcooking vegetables, broccoli rabe gets more mellow and less bitter the longer it cooks.

For the mashed potatoes:  Cover with water and boil till tender.  Drain.  Put back in the pot to steam off the residual water, add the olive oil and salt and mash to a silky texture.

Presentation:  Stack up the ingredients starting with the mashed potatoes, then the broccoli rabe, then the tuna (placing the chunks like bricks to get some height), then the fennel slaw on top.  Like this: 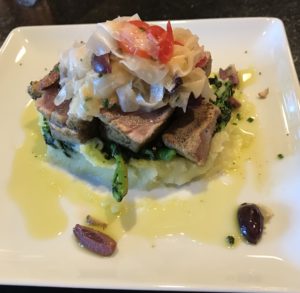 For the peppadew and olive vinaigrette:

1/2 cup extra virgin olive oil (Robert Portale’s recipe called for 1 cup!  I cut it in half.  Still pushing it)

1/4 cup pitted, halved picholine olives (you won’t find them pitted..get an olive pitter; they’re cheap and fun to use, or just carve the flesh off the pit since we’re aiming for halves anyway…can use other similar green olives if you can’t find picholines like me tonight)

For the grilled fish and fennel:

2 pounds stripped bass fillet or steaks, or other sweet white fish such as snapper, halibut or grouper

Canola oil for grill and for fish

In a bowl, combine the oil, peppadews, olives, vinegar, shallot and garlic.  Season with salt and white pepper to taste.  Whisk in chive just before serving.

Build a charcoal fire in a grill (real charcoal, not Matchlight, and without using lighter fluid).  Let the coals burn until covered with white ash and spread them out in the grill grate.  Lightly oil the grill cooking surface.

Cut the fennel bulbs in half lengthwise.  Slice each half lengthwise into 1/4 inch slices.  Keep each slice attached at the root end.  You are basically making wedges that all come to the root center.  This both looks nicer and makes them easier to handle on the grill.  Like this: 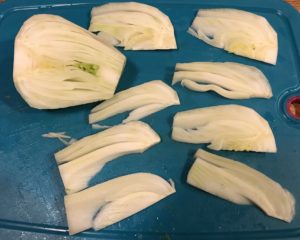 Brush the fennel with ollve oil and season with salt and pepper.

Grill the fennel pieces for about five minutes on each side, or until they are softened and take on a pleasant smokey flavor.  Each side should have nice grill marks as well.  Remove and set them aside, covered in foil to keep warm.

Clean and oil the grill again before cooking the fish fillet.  Brush the filet with oil and season with salt and pepper.  Grill for about five minutes on each side until opaque in center.

Presentation:  Arrange the grilled fennel on a platter the shape of, and a little larger than, the fish fillet or steaks.  Like this:

Top with the fish, and spoon the vinaigrette over and around the fish.  This dish presents beautifully, the red of the peppadews contrasting with the green of the olives and the chives, the fish and the fennel glistening with the oil.  Like this:

Note: What’s pictured above is a half portion of fish (halibut steaks) with a whole portion of vinaigrette.  Got hungry for this as I was writing this blog.

1 thought on “Fish and Fennel”