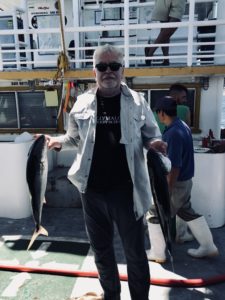 I spent a week off the grid in September, fishing in the Sea of Cortez around some islands about halfway down the east coast of Baja. This part of Baja is a desert, a stark land of old volcanoes and raised seafloor that is quite young geologically, only barely colonized by cactus and virtually uninhabited. But in contrast, the sea is teeming with fish, and as a result, the sky is filled with birds.

The sun is the central character in the story of this place, and being melanin-deprived, I had to cover myself from head to toe to keep from burning up. 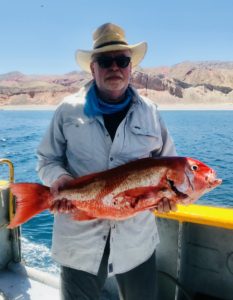 I spent nearly the entire week aboard a converted trawler, and in one of the nine fishing pangas, only touching land a couple times to snorkel and wallow on my back, channeling my inner sea otter. The fishing was great, and included yellowtail, pargo, dourado, cabrillo and grouper.  These are the fish caught one afternoon by the super fishing couple Doug and Myong: 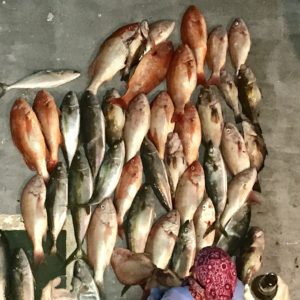 I gave a lot of the fish I caught to the boat. The California rolls, sashimi, ceviche and fish tacos that the cook made from it were some of the best fish I’ve ever had, and I have eaten fish three or four times a week for my whole life.  This is what the cook on the boat made from the two yellowtail in the picture at the top of this post, which were baked with onions and bacon: 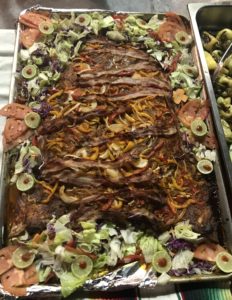 The baked fish was combined with these fixings to make superb fish tacos: 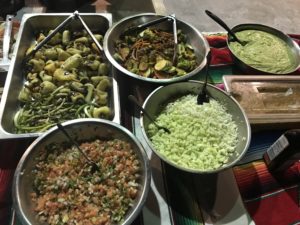 My nephew Erick organized the trip, and nearly all 27 of us were his friends or friends of my brother Peter, who had been organizing these trips once or twice a year for 25 years before Erik took over a couple of years ago. Most of my fellow fishermen had been on previous trips. I had been on a spring trip 25 years ago, when we had migrating whales and much colder water. On that trip, the yellowtail were near the surface, and you could just let the live mackerel that we used for bait run out your line. This trip the yellowtail were near the bottom where the water was cooler, around 150 to 200 feet. A lot of sinkers and a lot of reeling.

We got up at 5:30, just before sunrise, for a quick breakfast and a morning of fishing, two or three to a panga, plus a guide.  That is Isaac, one of my two fishing buddies along with his friend Mark. Our guide Alex is at the tiller. 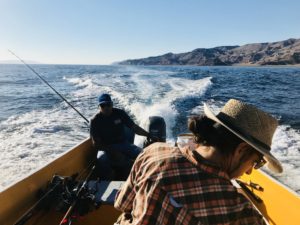 We’d come back for lunch, a short nap, then out again for an afternoon of fishing, then back at sunset and a late dinner. Afterwards we’d jig for mackerel till about 11:00 to use as live bait the next day. Here are some of them in the live bait tank. 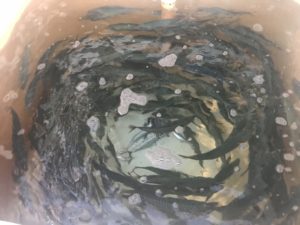 Free of any access to phone or internet, I was also free of all the of the often meaningless audio and visual clutter that fills my head in Connecticut. The drone of the nightly news cycle was replaced by the simple rigors of the daily fishing cycle.

An Opening of My Senses

Desert and ocean are my two favorites of nature’s places. They open me up and fill me with the vastness of their great emptiness. They make me more mindful, alive and aware.  On this trip especially, the way that sunlight colors the water, the land and the sky was a constant delight.

The ocean a mix of blue and turquoise..

The rugged land a mix of rich tans and browns… 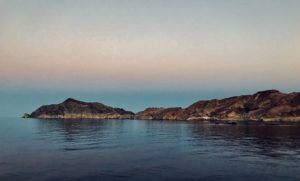 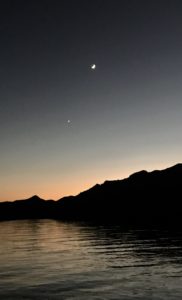 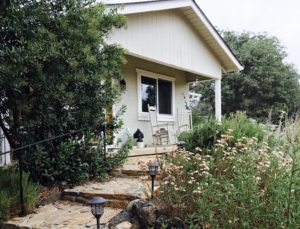 Back at my brother’s house near Julian, California on Saturday, I helped my nephew and his friends prep, vacuum seal and freeze the fish we could’t eat that night or the next day.  They took it in ice chests on the plane back to their homes in Colorado.  I gave my share of the frozen fillets to my brother and sister, as I am too spoiled by Saybrook Fish to contemplate eating frozen fish for months.  I grilled some of the fresh pargo (a kind of red snapper) Saturday night with grilled fennel and a sauce of peppadews, picholine olives, shallots, EVOO, vinegar and chives. See my post Fish and Fennel.  On Sunday, I just barely seared some of the fresh yellowtail in a baste of soy and wasabi and a coating of black sesame seeds, with a mango/corn/avocado salsa, which I learned to make in the first cooking class I took a year and a half ago.  See my post The Fig School I. 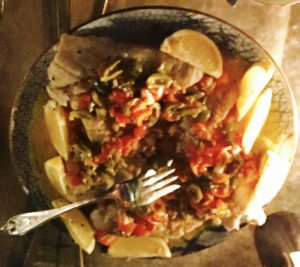 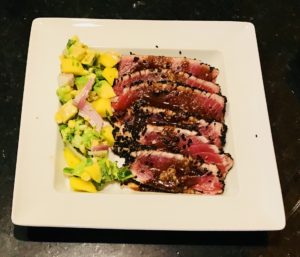 Fish is the most perishable of foods.  It starts losing its quality the minute it is taken out of the water.  It is one thing to buy your fish whole so that you can see it has clear eyes, red gills and resilient flesh (see The Ultimate Fish Cooking Class).  That is a good idea, whenever possible.  But an even better idea is to catch your own fish, and eat it almost as soon as you catch it.  That is heaven.

3 thoughts on “Fishing for My Dinner”