All of Rhode Island is divided into two parts:  the West Bay, which likes its Johnny Cakes thick and deeply browned, like this 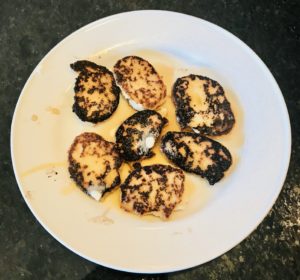 And the East Bay, which likes its Johnny Cakes thin, crisp and golden, like this. 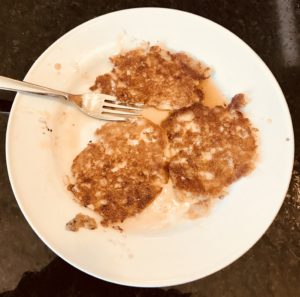 The pinnacle of the East Bay Johnny Cake world is Bishop’s Fourth Street Diner in Newport, which was one of my favorite haunts when I lived there for 10 years: 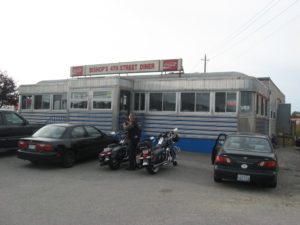 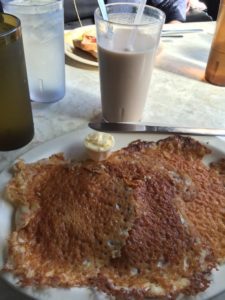 I like both types of Johnny Cakes, but prefer them East Bay-style.

Johnny Cakes are made from a fine stone-ground white corn meal, rather than the wheat flour used for most pancakes.  For West Bay-style Johnny Cakes, combine 1 cup white corn meal, 1 tsp sugar (I used maple sugar) and 1/2 tsp salt. Mix together and then scald with 1 1/4 cups boiling water: 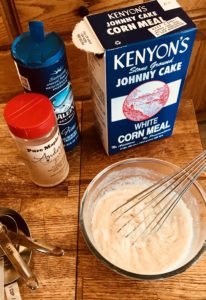 Mix and then drop 1 T at a time onto a well-greased griddle or skillet over medium heat.  Let sit for 6 minutes, then flip and cook for another five minutes. 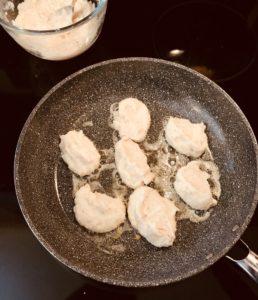 East Bay Johnny Cakes are made the same way, only using more liquid.  Instead of 1 1/4 cups water, use 1 cup water and 1 cup milk. 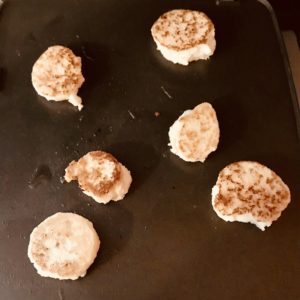 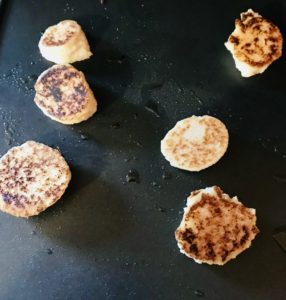 In either case, the primary function of a Johnny Cake is to serve as a foil for maple syrup and butter.  Since I was making all of these Johnny Cakes, I decided to do a comparison of the three maple syrups I have in my fridge: 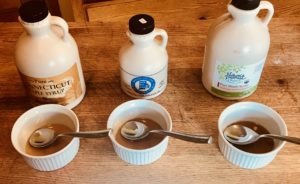 The one on the left is the syrup I bought on Sunday from Anderson’s Sugarhouse in East Haddam, CT.  The one in the middle is from a farmer in Rhode Island near Kenyon’s Grist Mill, where I get my corn meal.  The one on the right is from Stop & Shop.  All are Grade A 100% maple syrup. The CT syrup was the lightest in color, had the most subtle flavor and was the least sweet.  The S&S syrup was much darker, sweeter and less complex.  The RI syrup was somewhere in-between.  That was when I had a teaspoonful of each, straight.  When I put them with butter on the Johnny Cakes, it was hard to tell the difference among them.