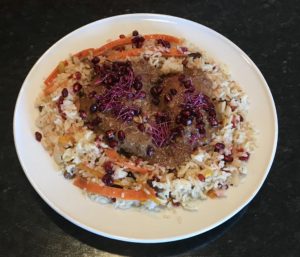 This is about my rather insane attempt to reprise two of the dishes I learned at the Fig Cooking School class Spice Market: Persia: Khoresh-E Fesenjan and Javaher Polow, Chicken-Pomegranate Stew and Jeweled Rice.  I say “insane” because at the class there were 12 other people to help make the two dishes.  The dishes are extraordinarily good and definitely worth the effort, but you might not want to try to cook them by yourself.  It would make a great come-cook-dinner-together party.  Part of the fun of a cooking class is the conviviality of cooking and sharing a great meal with other people who have a passion for cooking and good food.  Next time I make the rice, I am going to do it with a group of friends. Even Iranians only make Jeweled Rice for special occasions, like weddings, and I expect the cooking of it is a group affair.

To make this meal a bit easier to pull off, you can make the chicken a couple of days before you make the rice.  You actually should do that;  like all stews, it benefits from sitting in the fridge for a day or so.  I made the chicken on Sunday, then made the rice on Tuesday and reheated the chicken to eat with it.

Here’s the Mise En Place, the layout of the ingredients, for the two dishes:

The ingredients for the pomegranate chicken stew: 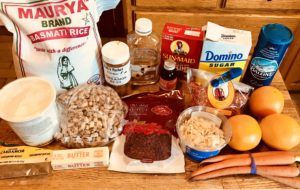 The ingredients for the jeweled rice include: 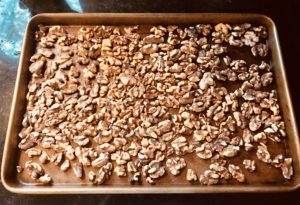 Then finely grind in a food processor: 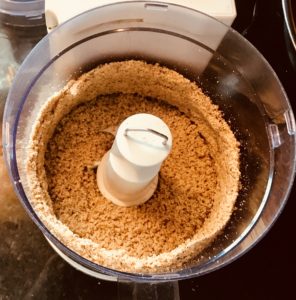 Heat 2-3 T of oil in a skillet over medium heat until very hot.  Sauté the onions until they are glassy and just beginning to brown, about 10-15 minutes: 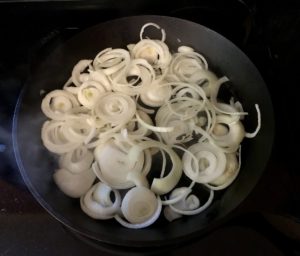 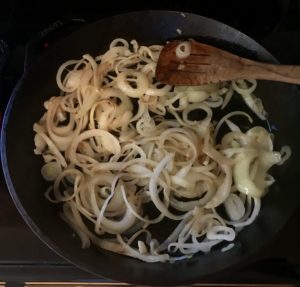 Remove the onion from the skillet with a slotted spoon, transfer to a bowl, and put the onion in the fridge for 15 minutes, then add to the walnuts in the food processor and puree. Add 1 cup of the pomegranate juice, the pomegranate molasses, salt, pepper, turmeric, cinnamon, saffron water and grape molasses (or sugar) and mix well to a creamy paste.

While the onion is chilling, heat 2 T of oil in a large skillet(s), season the chicken thighs on the skin side and brown skin side down for 4 minutes. While the chicken is browning on the skin side, season the other side, and then flip and brown on other side for 4 minutes.  (Seasoning this way minimizes hand contact with the raw chicken.)  I have both a very large skillet and a 12-inch skillet so I was able to brown the chicken in one batch.  You may need to do it two batches.  Don’t crowd the chicken or it won’t brown, just steam.  Mine were less crowded than they look in this picture. 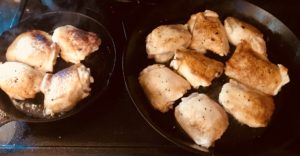 Put the walnut/onion puree and the rest of the pomegranate juice in a Dutch oven and stir well to mix.  Add the chicken and gently stir again being careful not to break the skin. Cover and cook in 350F oven for 1 1/2 hours until chicken is fork tender. 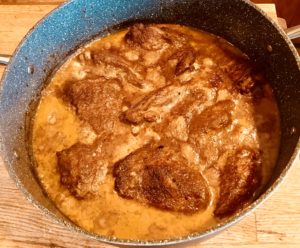 Let cool uncovered and then cover and refrigerate overnight (or longer) and then reheat in 350F oven.  Serve with a sprinkling of pomegranate seeds and toasted walnuts.

OK, now for the jeweled rice…

Step by Step for Jeweled Rice

I couldn’t find raw pitstachios, so had to use some roasted, salted ones in the shell that I bought at the Turkish market in West Haven.  This added a bit of work, but the pistachios were very tasty, but most of them were not green, which was a problem because they were supposed to be the emeralds in the jeweled rice.  Next time I will try to find some raw green ones. 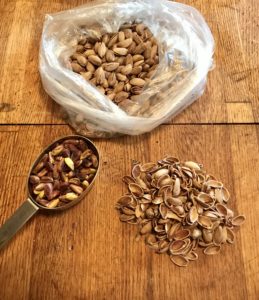 You heat 1 T of oil in a 12-inch skillet over medium heat, and toast the pistachios, almonds and raisins for 20 seconds, then remove from the skillet and set aside.  I used already sliced almonds for this, but next time I will start with whole raw almonds, blanch them and remove the skins, then slice them myself.  This is so I can get similar-sized slices of the pistachios and almonds, which I think would improve the presentation.  I think a more rustic slice would look better with this dish. I might also use golden raisins instead of the regular raisins to make them a golden jewel and to not compete with the barberries for the ruby role. 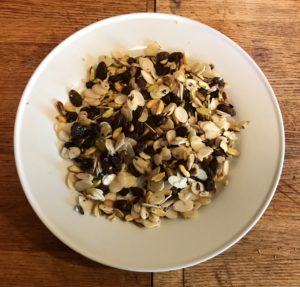 Clean barberries of any grit by placing them in a fine mesh strainer in a large bowl of cold water. Let soak for at least 20 minutes so any sand can sink to the bottom. Take the strainer with the berries out of the pan and run the berries under cold water.  Drain.  In the same skillet used for the raisin/nut mix, heat 2 T of oil over medium heat and add the barberries, along with a few drops of the saffron-orange blossom water, and 2 T of sugar. Sauté for 1 minute and remove from heat, being careful not to burn the barberries, as they burn easily. Set aside. 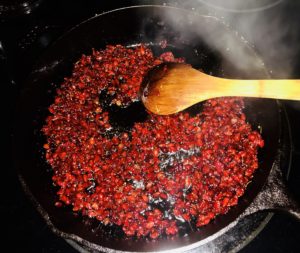 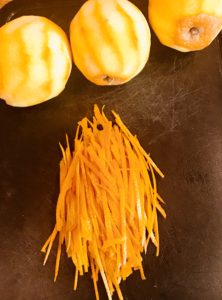 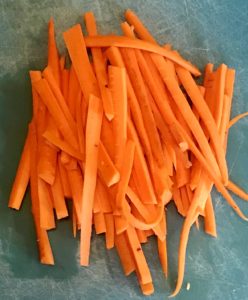 Place the orange slivers in a small pot of boiling water and boil for 5 minutes to remove the bitterness. Drain and rinse with cold water.  Heat 4 T of oil in a 12-inch skillet over medium heat.  Add the carrots and the orange peel and sauté for 2 minutes.  Add 1 cup of sugar, a few drops of the saffron-orange blossom water, cinnamon and cardamon.  Sauté for 1 minute.  Add 1 cup of water, bring to a boil and cook over medium high heat for 10-15 minutes until the mixture is lightly caramelized. 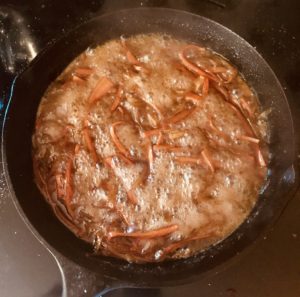 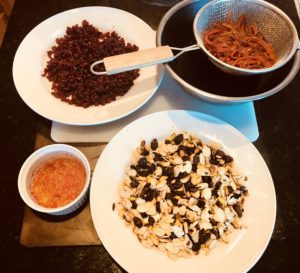 Next you rinse the rice in warm water. The recipe says to do this 5 times, which is what I did, but in the class we only rinsed it once. The purpose of this is to get the starch in any surface powder off of the rice.  Most commercially available rice actually has very little starch powder on it, as it has already been rinsed before you buy it.  I make Puerto Rican rice a lot with Goya medium grain rice, which used to have a lot of starch powder on it, and you really had to rinse it for a long time to avoid sticky rice.  Not any more,  You can just rinse the rice in running hot water till the water runs clear.  Then allow to drain. 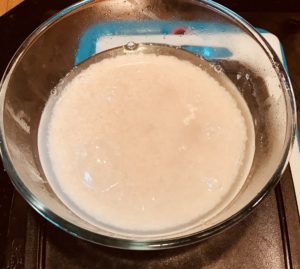 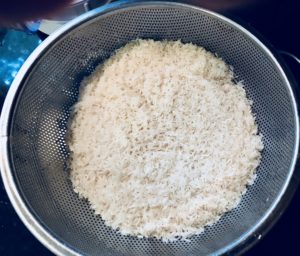 In a large a deep non-stick pot, add 10 cups of water and the salt and bring to boil.  Pour the washed and drained rice into the pot and boil briskly for 8-10 minutes until the rice has risen to the surface and is soft. Drain in a fine meshed strainer and rinse.  Measure out 3 cups of rice and set side in a medium bowl. 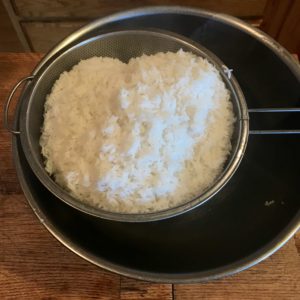 Whisk together 1/2 cup oil, 1/2 cup hot water, 2 T of yogurt, and a few drops of the saffron-orange blossom water.  Add to the 3 cups of rice that was set aside, and spread evenly on the bottom of the pot you used to boil the rice, first wiping clean and coating lightly with oil.  This base of 3 cups of the rice with the oil/water/yogurt/saffron mix is what will form the tadig, the golden crust at the bottom of the rice, which is the most prized part of this dish.  Give the pan a good shake to even out the rice.  Take one cup at a time of the remaining rice and place it on top of the saffron-rice-yogurt mixture, shaping a mound or a pyramid of rice (this shape leaves room for the rice to expand and enlarge). Cover and cook over medium-high heat for 8-10 minutes.  This is the riskiest part of the recipe.  If the flame is too high, the coveted crust will burn; if it is too low, it will not achieve the beautiful golden-brown color you are after.  Only practice will allow you to perfect this part.  In this, my first solo attempt, I cooked it a little too low. I got a golden crust, but not as golden brown and crisp as in the class.  I don’t have pictures of this process as I was focusing on the cooking.

Next, you whisk together 1/2 cup (1 stick) of melted butter, 1/2 cup hot water, the remaining saffron-orange blossom water, and the syrup from the carrot orange mixture. 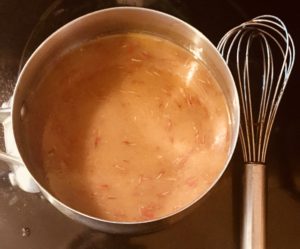 Gently spread the liquid over the mound of rice. 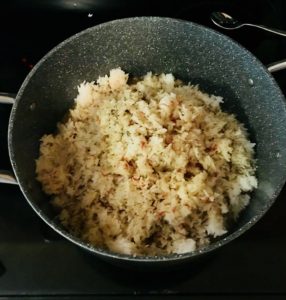 Wrap the lid of the pot with a clean dish towel and cover firmly to prevent steam from escaping.  Cook for 70 minutes over low heat. 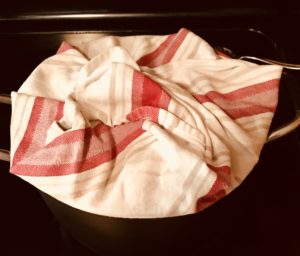 Remove the pot to a cool damp surface for 10 minutes without uncovering it so that the crust will slowly release from the bottom of the pot.

Then uncover and loosen the edges with a soft spatula.  Carefully spoon a cup or two of rice at a time onto an attractive medium size platter, alternating with layers of the orange-carrot mixture, the barberries, and the nut-raisin mixture.  Continue till you have a mound of rice the shape of a cone, and only a thin layer of rice at the bottom of the pot.  Detach crust from the bottom of the pot by placing a plate over the the top and flipping it over.  Cut the crust into pieces and pile them attractively on the platter.  The crust is always the first to go at a Persian gathering. 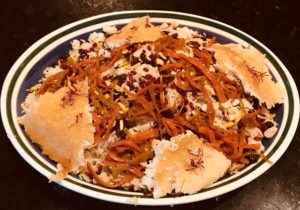 This is the rice from the class.  You can see it came out more yellow becuase of the better saffron. 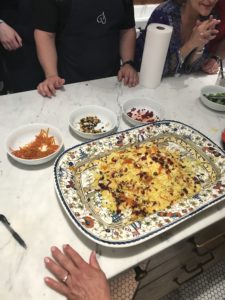 Here it is as plated with some of the chicken, which is topped with pomegranate seeds and some Amaranth microgreens that I happened to have from my Trifecta CSA. 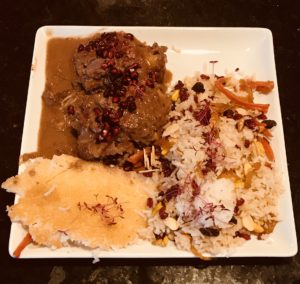 Here’s how it was plated in the class: 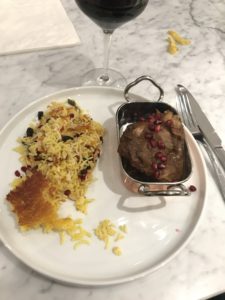 And here is a second, better plating approach with some of the leftovers the next day.  No tadig left, unfortunately.  It all went the first day.

Not bad for a first try, if I do say so myself, especially as I was flying solo.  Absolutely scumptious!

2 thoughts on “A Persian Feast”