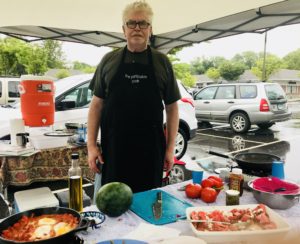 My second demo at the Old Saybrook Famers Market:  two watermelon salads, a beet soup and Shakshuka.  A celebration of all things red.

It was a bit soggy:

But the intrepid souls who showed up in the rain liked my creations.  A special Thank You to my brother-in-law John Piurek, and his wife Dee, who helped me with the demo.

Here are ingredients for the four dishes arranged on my chopping block at home: 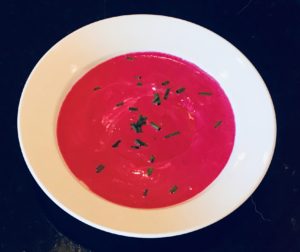 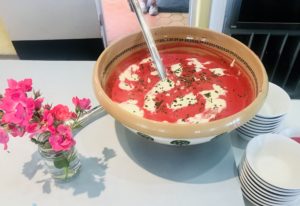 I spent a week in July at the Ballymaloe Cookery School in Shanagarry, County Cork, Ireland. The school is located on a 100-acre organic farm and helped to launch the farm-to-table movement in Ireland and Europe. This is one of the soups I learned to make at the school. This cooking method produces a beet soup of extraordinary color. 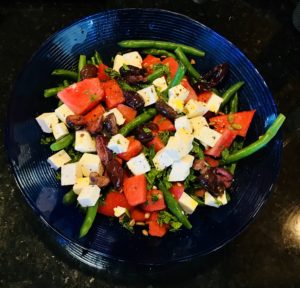 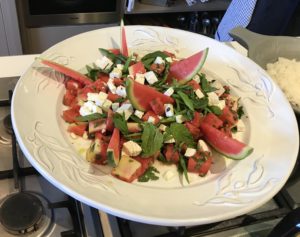 This is one of the salads we learned to make at the school.  I added Greek olives to the recipe.  The contrast of the sweetness of the watermelon (make sure you use a really sweet ripe one) and the saltiness of the feta and the olives is awesome. 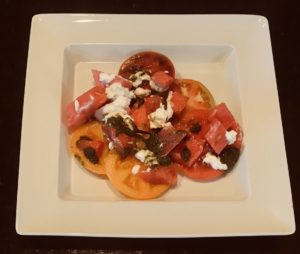 This recipe is inspired by a salad that The Essex Restaurant is serving right now. It combines watermelon with heirloom tomatoes, stracciatella (the inside of burrata, a type of mozzarella cheese) and a salsa of poblano peppers and ramps, which they make at the Essex Restaurant and which you can buy there.  The combined taste of the poblano chile and the ramps is divine.  Ramps are wild leeks that grow in the Connecticut woods for two weeks in May.  See my blog Ramps!. 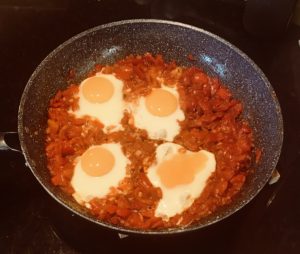 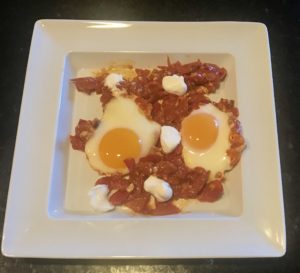 This is from the Jerusalem Cookbook by Yotam Ottolenghi and Samy Tamimi.

I went back to the Essex Restaurant and tried their heirloom tomato and watermelon salad.  They had changed it to use thin round slices of watermelon, cherry tomatoes, pickled ramps rather than the salsa, and feta instead of stracciatella.  Or who knows, maybe that is what it was always like because I had only heard about it and not eaten the “previous version.”  Here’s what it looked like: 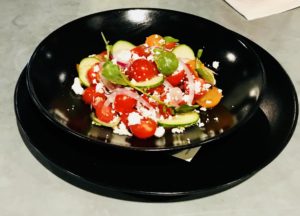 I decided I liked my version better, and got to talking with some of the staff at the Essex about it and we thought about stacking the watermelon and tomato, so I played with that idea, and this is what I came up with: 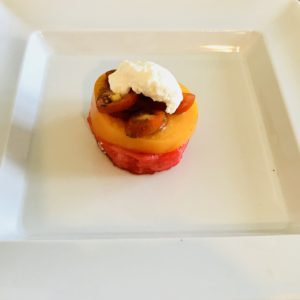 It’s a slice of red watermelon cut to the same size and shape as the slice of yellow tomato above it, which in turn is topped with sliced red cherry tomatoes tossed in the poblano/ramp salsa, and then the whole thing topped with a dollop of stracciatella.  It’s both beautiful and delicious,  You need a steak knife to eat it.

At the risk of carrying a good thing too far, I am now in possession of yellow watermelon and yellow cherry tomatoes.  We’ll see what happens.

I did go too far with the stacking idea, so I won’t show that, but I did another version of tomato-watermelon salad this weekend (September 23rd).  This was inspired by Angie Brenner, the co-author of the Tree of Life Cookbook, which I have blogged about before. See A Turkish Feast

I finally met Angie at my brother’s house last weekend, where she turned me onto the idea of roasting cured black olives and using them as a garnish by crushing them and sprinkling over a dish.  So that’s what I did:  halving some cherry tomatoes and tossing in some of the Essex Restaurant poblano chile/ramp salsa, adding some watermelon balls and some small mozzarella balls, and then pitting and halving some black olives and adding those, and finally, sprinkling over some crushed roasted black olives and some Aleppo pepper.  Just awesome! 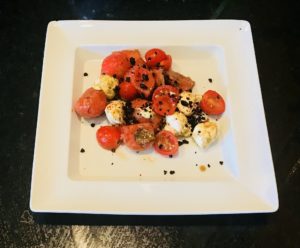