I made this today using the recipe I learned at the Ballymaloe Cookery School in Shnagarry, County Cork, Ireland.

Here is Cauliflower Cheese as demoed by Rachel Allen at Ballymaloe: 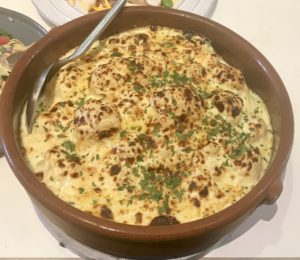 a slice of onion

sprig of thyme or parsley 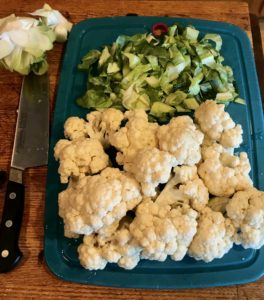 Put not more than 1 inch of water into a saucepan just large enough to take the cauliflower and add a little salt. Place the cauliflower on top of the green leaves in the sauce pan, cover and simmer until cooked, 10 - 15 minutes.  Test by piercing the stalk with a knife; there should be just a little resistance.  Drain the cauliflower and reserve the cooking water to make soup from the leftovers. 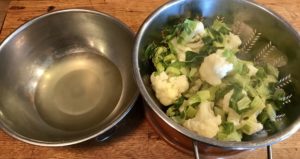 Put cold milk and cream into a saucepan with the onion, carrot, peppercorns and herb: 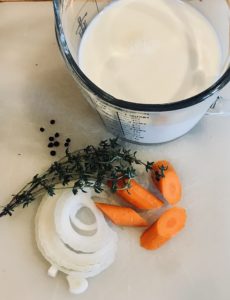 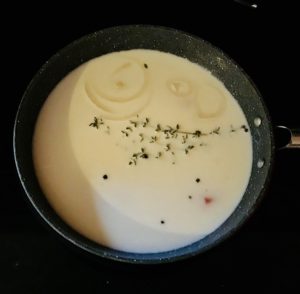 Bring to a boil, simmer for 3-4 minutes, remove from heat, and leave to infuse for 10 minutes. Strain out the vegetables. 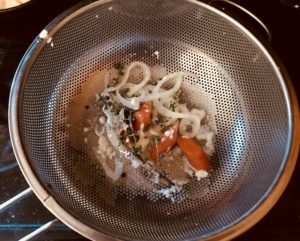 Make a roux by melting a stick of butter, adding 1 cup of flour and cooking over low heat for 2 minutes, stirring occasionally.  This will produce a lot more roux than you will need to thicken the milk.

Bring the strained milk back to a boil and thicken with roux to a light coating consistency. 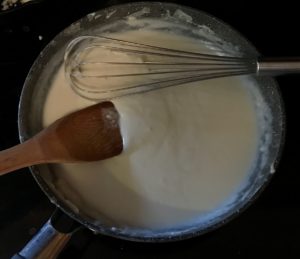 Add most of the grated cheese, reserving enough to sprinkle over the dish.  Season with salt and pepper, taste and correct the seasoning as necessary. 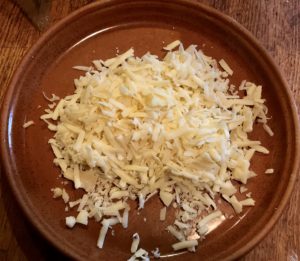 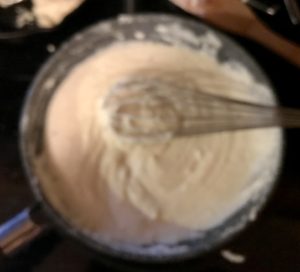 Put the greens in the bottom of a casserole dish, top with the cauliflower, then spoon over the sauce and sprinkle with the remaining cheese. 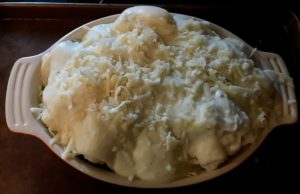 The dish may be prepared ahead to this point.  Put into the preheated oven for 15 minutes or under the grill to brown.  Check it as ovens vary.  If the cauliflower cheese if allowed to get completely cold, it will take 20-25 minutes to reheat in a moderate oven.

Here it is as it came out of the oven, before I garnished it: 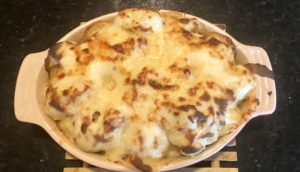 I could have used a larger dish, but I like the way this actually looks like a cauliflower.

I made a cauliflower cheese soup from the leftovers using a recipe from the Ballymaloe class, which I jazzed up a bit, as I think this soup is a little bland in the Ballymaloe recipe, in which you just add the cooking water, plus up to 3 cups of chicken stock, depending on how much you have left over, then liquify it with an immersion blender, or blitz it in batches in a food processor.  Taste and correct the seasoning, as it will almost certainly need more salt and pepper, particularly if you use an unsalted chicken stock like I did.  I also added a dash of cayenne and a dash of paprika. Balymaloe suggests garnishing it with croutons, cubes of cheddar cheese and parsley.  That's a good idea.  Will try it with the left over soup.  I just grated some Parmesan Reggiano on top and garnished with a thyme sprig. 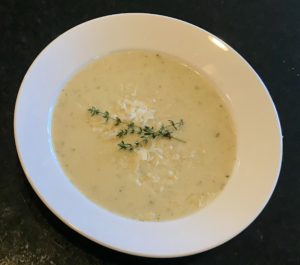 This was good, but might be even better with a few caramelized capers on top, the way Liv's does with their cauliflower and celery root soups.  See Curried Cauliflower Soup and Celery Root Soup with Fried Capers and Crème Fraiche. Those soups are based on vegetable stock versus chicken stock and Mornay sauce, so they are much lighter, but at the same time with a more pure and subtle taste of the cauliflower and the celery root.  I also like the use of crème fraiche as a garnish in those soups, as it contributes a nuttiness. 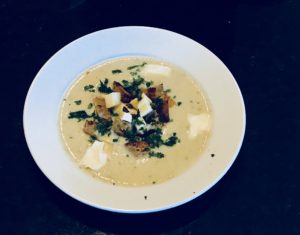 This was great.  I had one last bowl later with same garnishes except the capers and the crème fraiche.  That was even better.