This is my attempt to reprise it, starting with just these six simple ingredients (quatities shown will make 6 cups or so of soup, enough to serve four): 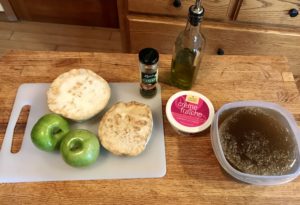 These are (from left to right): 2 Granny Smith apples (got this tip from my friend Kristin, the bartender at Liv's...it's very much a background flavor, but thickens and sweetens the soup), a whole celery root (two halves pictured above), 1 T capers, 1 tsp olive oil plus some to drizzle, 1 T crème fraiche and 4 cups vegetable stock.  Also needs some salt and pepper at the end.

Peel and roughly chop the apples and celery root: 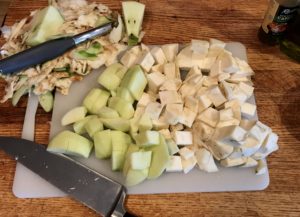 Cover with the vegetable stock and simmer, uncovered for 30 minutes: 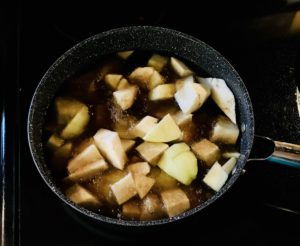 Purée the soup with an immersion blender.  Adjust seasoning.  Fry 1 T of capers (drained on a paper towel) in 1 tsp of olive oil till darkened and crisp, then dry on paper towel.  Garnish each bowl with some of the capers, a drizzle of crème fraiche in a zigzag across the bowl (I used a squeeze bottle to do this), a drizzle of olive oil around the edge of the bowl, and a few snips of chives and some micro greens (I used pea shoots):

This was true to the Liv's original.  Tasty, but light and subtle.  I think the pea shoots were a good addition, both for taste and color, better than the little green that Liv's used.  This soup is so pretty, it's like eating a painting.

Having fun with the squeeze bottle of crème fraiche: 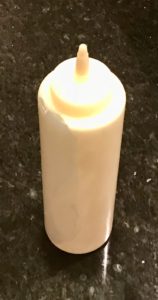