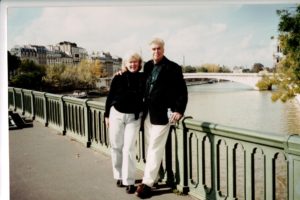 This dish is an attempt to recapture a food memory of a trip that Marilyn I took to Paris 20 years ago.  There we are on a bridge from the Marais to to the Ille Saint Louis.  Our daughter Liz took the picture.  She came over for a few days from London, where she had been recently posted by her New York law firm.  That was a golden moment, just before cancer cast a 20-year shadow over our lives, first taking Marilyn's brother Michael, then Liz' husband Bob, then Marilyn's sister Joan, and then Marilyn.

Thinking of this picture in my Valentine's Day reflections this week, I decided to make this Chicken Tagine with Preserved Lemon this weekend, as it was on that trip when Marilyn and I first tasted it, at a Tunisian restaurant near our hotel in the Marais.  Besides the chicken and preserved lemons, I remember that the tagine we ate also had apricots and olives, and was served over a bed of plain couscous.  Tagine is the North African word for stew, as well as for the pot it's cooked in.  The pot consists of a shallow bottom part with a rim around the inside, and a heavy conical top that fits inside the top rim of the bottom part, capturing the steam that is released by the food and returning it to the braising liquid in the bottom part: 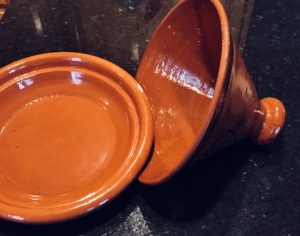 This recipe is an amalgam of the one from the Fig Cooking School that I posted back in November after my Moroccan Spice Market class there, and the one in Kip and Marilyn's Favorite Recipes, the cookbook that Marilyn and I made in two versions 16 years apart for our family and friends.  I probably got the K&M recipe somewhere online when I was looking for a version like the one we had in Paris.  That recipe used preserved lemons in the tagine itself, while the Fig recipe put the preserved lemon in an accompanying couscous.  Both ways are good, but I wanted to get back closer to that first tagine Marilyn and I had in Paris with the preserved lemon in the tagine.  Making this tagine was my first use of the preserved lemons I made back in November, right after the Fig Cooking School class (see the Fig School III blog for how to make preserved lemons...you can also buy them in specialty food shops): 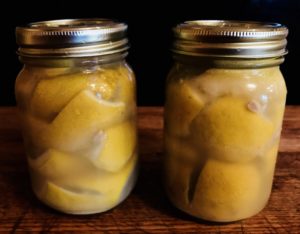 Both recipes call for skin-on, bone-in chicken thighs, which are seasoned and browned over moderate-high heat for five minutes a side.  I am using four thighs because that is how they come in a tray at Stop and Shop, and that number fits nicely in my tagine.  This is half the K&M recipe and one-third of the Fig recipe, so I adjusted the other quantities accordingly.  I used a cast iron skillet to brown the thighs in 1 tsp of sunflower oil because I didn't want to expose the tagine to the higher heat you need for browning: 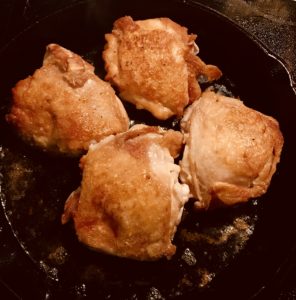 Both recipes call for sautéing an onion (I used a small one for this smaller recipe) for 10 minutes till soft but not browned.  I used the tagine for this and the rest of the cooking: 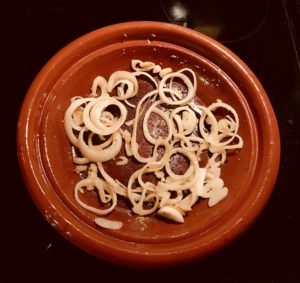 Then the Fig recipe adds cumin and Ras-al-Hanout (which includes ground ginger, garlic powder, ground pepper and other spices...there is a recipe for it in the Fig School III blog, or you can get it in spice shops as a prepared mix, which is what I used today) and the K&M recipes calls for fresh ginger, fresh garlic and pepper flakes (I used Aleppo pepper).  I decided to use both fresh and dry, as I thought the Fig recipe was under spiced, and using the ingredients in both their fresh and dry form would add depth and punch.  I added 1.5 tsp of grated ginger and 1 clove of crushed garlic to the softened onion and sautéd for an additional minute.  Then I pushed the onion mix to the outer edge of the pan and "bloomed"  1 tsp of cumin, 1 tsp of Ras-al-Hanout mix and 1 tsp of Aleppo pepper in the center of the pan for a minute ("blooming" is cooking spices directly in a dry pan to intensify their flavor): 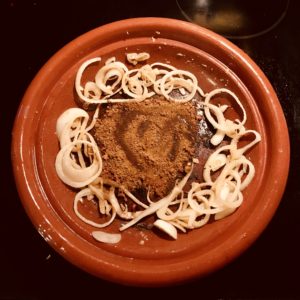 Then I added 1/2 cup of chicken stock, just to deglaze the bottom of the tagine. F&M calls for adding 2/3 cup of chicken stock and Fig calls for 1 cup, but I reduced it to 1/2 cup because the tagine does such a good job of capturing and recycling the steam released from the chicken and tomatoes that you do not need as much added liquid. Then I added the browned chicken, plus (from K&M) 1 T chopped preserved lemon (peel only), 1 T chopped Kalamata olives, 1 T pine nuts, and (from Fig) 2 plum tomatoes sliced into fourths and 8 dried apricots (Fig also called for a couple of sprigs of thyme and some prunes, but I thought they were too dominant in the tagine I made before so I left them out, and didn't need them with other flavors in this recipe...also reduced the amount of tomato in the Fig recipe for the same reason): 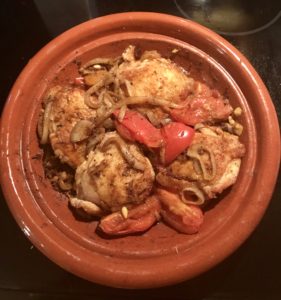 I then put the conical top on the tagine, put the tagine on a baking sheet (to capture any liquid that overflows from the bottom part of the tagine) and baked covered in a 350F oven for 1.5 hours: 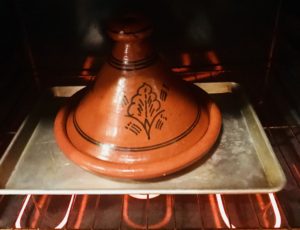 Then I removed the top.  Voilà!: 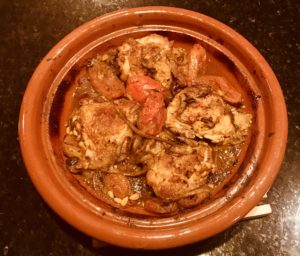 I decided to accompany this with just a plain couscous, rather than a flavored one like we did at Fig.  I plated the tagine on a bed of couscous, so that the couscous would absorb the flavors of the tagine.  That's how we had it Paris.  And per K&M, I garnished the plated tagine with a little chopped cilantro: 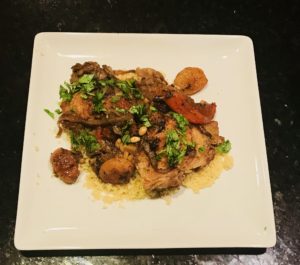 It's delicious.  I am transported back to that Tunisian restaurant on the Place Bastille, to that magical week, and to Marilyn. 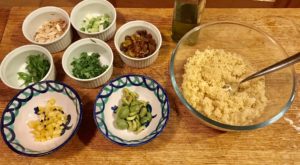 Here it is mixed: 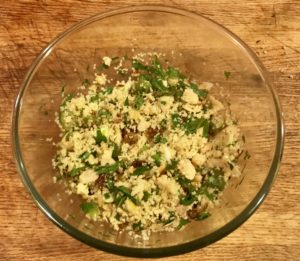 And plated with the tagine: 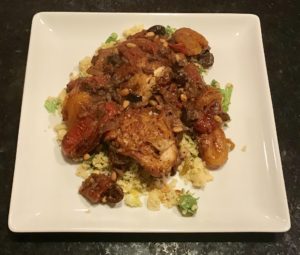 This jazzed up version was great, but the original with the plain couscous is my sentimental favorite.