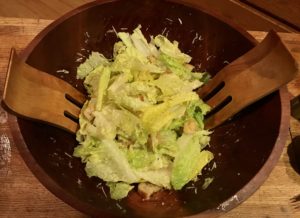 [NOTE:  This salad is actually a lot easier to make than I make it appear with all the step-by-step.  It only takes me about 10 minutes of work time.  I have been waiting to make this until the romaine scare was over.  As I kept checking back to see if it was safe, I kept finding suggestions about how to soak lettuce, of any kind--not just romaine, to ensure it's safe to eat.  I never soaked lettuce in a salt and vinegar solution for 10 minutes before.  Now I always do.]

To me, Caesar Salad has always been associated with romance. Maybe that’s because I first discovered it early in my marriage to my wife Marilyn at date nights at Delmonico’s on Worcester Street in New Haven. Delmonico’s has long since closed, but in its day, it was the most romantic restaurant in Connecticut. We always had Veal Saltimbocca, a Delmonico’s specialty that I blogged about a couple of weeks ago, which we always preceded with a Caesar Salad made tableside for two.

I watched carefully as the salad was made, and after a few times, I felt confident that I could make one myself at home. I would go on to make at least one Caesar Salad a week for the next 40 years, about 2,000 salads! Almost always by candlelight.

In the course of making all of those salads, I read many Caesar Salad recipes, discussed the fine points with other cooks, and most important, experimented with every conceivable combination of ingredients. There are many choices to be made, and this is where I came out after 2,000 salads. All quantities are for two heads of Romaine (which is enough for two):

Oil?  Extra Virgin Olive Oil, but not too strong; I use Kreta Reserve, a mild EVOO (6 T)

Salt? A good quality sea salt (a pinch in the dressing, then more to taste on finished salad)

Pepper? Fresh ground black (a few grinds in the dressing, then more to taste on the finished salad)

Croutons? Yes, home made from rye bread, sourdough or sourdough rye (4 slices, cubed, tossed with a little olive oil, and toasted till golden, then cooled)

You might make different choices than I do. Experiment till you get it the way you like.

Trimming, Washing and Crisping the Lettuce

The one point on which you cannot compromise is with the lettuce. You may think that a head of lettuce per person is excessive, but that’s because you have to throw away more than half of the head, or the salad will be bitter. Trim entire outer layer of dark green leaves (unless this was already done by the grocer): 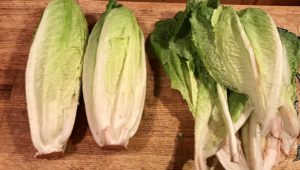 Then the top third of the head:

And maybe an inch or so at the bottom:

And then break what’s left in two, which should result in bite-size pieces:

I do all this by hand because I don’t like the look of knife cut lettuce, but that’s just me.

Dissolve 2 T of sea salt into a large bowl of water and 1 T white vinegar, and soak the lettuce for 10 minutes. 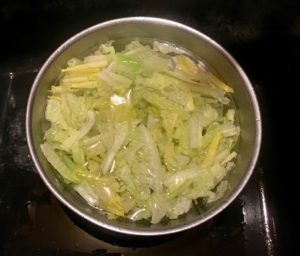 The water will loosen any grit, which will fall to the bottom. It will also drown any insects. It will not kill bacteria; that’s what the salt and vinegar are for. Carefully lift the leaves out of the water and place in the basket of a salad spinner. Gently rinse the leaves in the basket under running water: 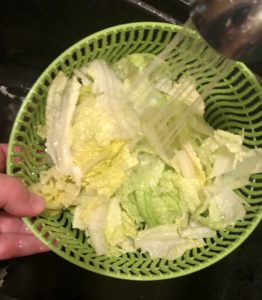 Put the basket in the spinner base, put on the top and spin dry: 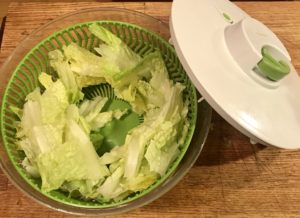 In all of this handling and rinsing, you need to respect the lettuce, as you can bruise it, even though Romaine is pretty tough.

Line the bottom of the spinner with paper towels: 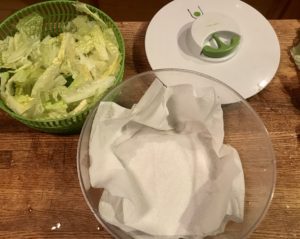 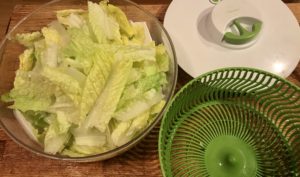 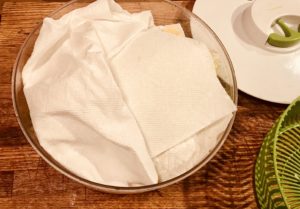 And then put the top on and put it in the fridge to crisp. The paper towels will draw out any residual water, helping the leaves to crisp. This is the first thing I do so that the lettuce can be crisping while I’m making the croutons and the dressing. 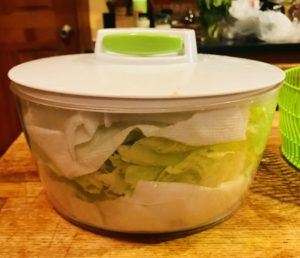 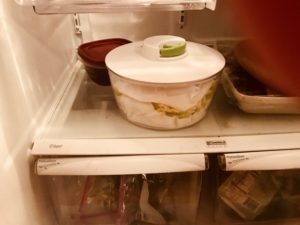 Next I make the croutons, making cubes from as many bread slices as I need depending on how much salad I’m making.  I toss the cubes in a little olive oil, then toast them in a little toasting pan in a toaster oven at 350F or so until golden: 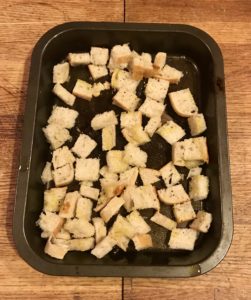 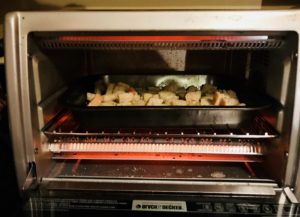 This only takes a few minutes. Watch carefully so they don’t burn. Once done, tip them from the roasting pan to a plate, so they can cool: The croutons must be cooled off before you use them or they will wilt the lettuce, defeating the crisping process. 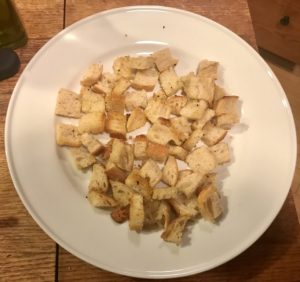 Anytime you are adding oil and lemon juice or vinegar to egg yolk you are making a mayonnaise, so Caesar dressing is a kind of mayonnaise. If you use mustard in the dressing/mayonnaise, it doesn’t really matter in what order you add the ingredients, or how you mix it, as the mustard will emulsify the egg, EVOO and the lemon juice without elaborate whisking. I usually just stir it briskly with the salad tongs to make a mayonnaise. When the waiter at Delmonico’s made the salad tableside, he would start by mashing the anchovy filets with two forks in the bottom of the salad bowl to make a paste, so that’s how I start my dressing too: 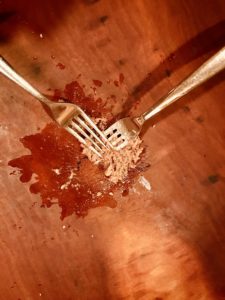 Mashing the anchovy into a paste ensures that it is integrated into the dressing as a background umami enhancer, rather than a distinct element and taste. Don’t leave it out even if you think you don’t like anchovy. If you mash it into a paste, you won’t know it’s in the salad, except that the dressing will taste a lot better.

Then I add the egg yolk, mustard, EVOO, lemon juice, garlic, and salt and pepper: 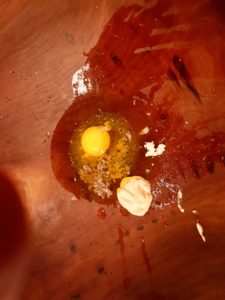 I then mix that up into a thick dressing or mayonnaise, as I said, just stirring briskly with one of the salad tongs: 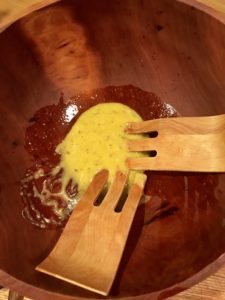 Grate the Romano from a block of cheese (I use a hand crank cheese grater): By now, the croutons should have cooled and the lettuce should have crisped. It’s time to assemble the salad. To the dressing in the bottom of the bowl, I first add the crisped lettuce leaves and then toss to coat with the dressing, either VERY gently with the tongs, or with my fingers (wash your hands first of course, but don’t be afraid to try this; it’s the best way to evenly distribute the dressing without bruising the leaves): 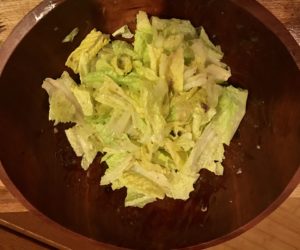 I then add the grated cheese and toss again, again either with my fingers, or VERY gently with the tongs: 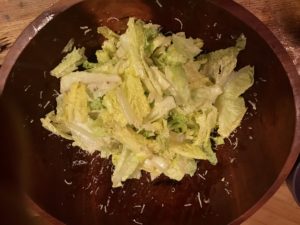 Finally, I add the croutons, toss again as before, and serve at once.  Here is the final salad, ready to serve.  A thing of beauty. The romance is up to you, but I've set the table.  Get some candles.