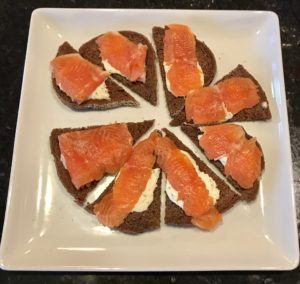 John Dombrowski used to have a morning radio show on public radio in Hartford called Where We Live. I was a guest on it several times when I was Deputy Commissioner of the Connecticut Department of Economic and Community Development. As a sound check, John always asked his guests what they had for breakfast. I always told him that I had Gravlax, and it was true. I didn’t eat gravlax every morning, but for some reason, I had eaten it every morning that I was a guest on his show. Made me realize that I eat a lot of gravlax. It is the one food element from my Swedish heritage that is a central part of my diet.

Gravlax means “grave salmon” as it was originally made by fisherman burying fish in sand above the high tide line and allowing it to ferment. It is now “buried” by weighing down a sandwich of two boned fillets that have been rubbed with a mix of salt and spices. Through osmosis, the liquid in the fish is drawn out, creating a salty brine which cures the fish. It is traditionally made with salmon, but you can also make it with Arctic Char, which is a kind of sea trout. The first time I ate Arctic Char was in Sweden, so I know they have it there.  That’s what I used when I made it this week.  But salmon is great too.

Make a rub with a mix of 2 T fresh ground white pepper, 1 T fresh ground juniper berries, and ¼ cup salt (these quantities will be enough for 2 to 3 pounds of fish): 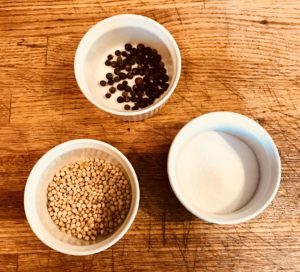 I grind the white peppercorns and the juniper berries in my coffee grinder: 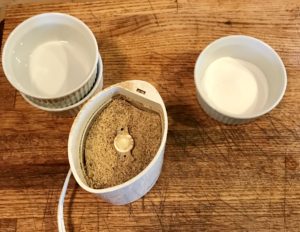 Then mix with the salt to make the rub: 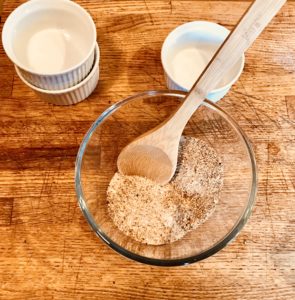 Rub each side of each fillet with the spice/salt mix, put one fillet skin side down in a dish that just fits it (this dish is a little bigger than I would like, but was the only one I had that would fit the fillets I bought), and top with one whole bunch of fresh dill, saving about 1/4 cup of dill to make a dill/mustard sauce later: 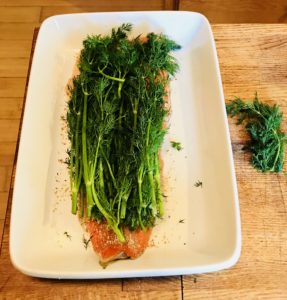 Sprinkle with 3 T of gin, then top with the other fillet, skin side up: 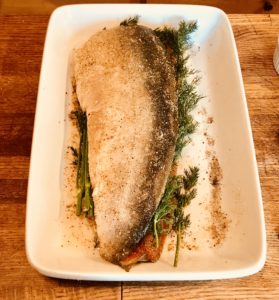 Then cover with plastic wrap (or put into a ziplock bag if your fillet sandwich is smaller than the one here, as that will make turning every 12 hours a bit easier): 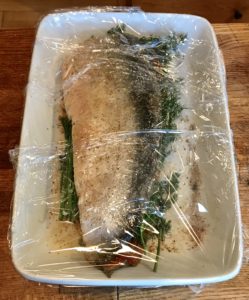 Then find a board approximately the same size as the fish, and something to weight it down with, like a clean stone or heavy cans: 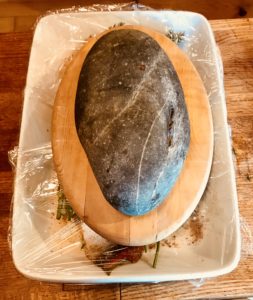 Put it in the fridge for at least two or three days, flipping the fish over every 12 hours to ensure both fillets get equal time in the brine (it's easier to put the wrapped fish in the fridge first, then put the board and weight on it): 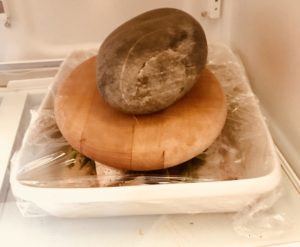 Here it is, uncovered and ready for the first flip, after 12 hours: 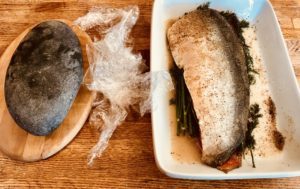 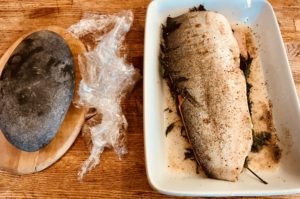 Spoon some of the brine in the bottom of dish over the top of the fillet sandwich,  then wrap in in new plastic wrap and put it back in the fridge with the board and the stone for another 12 hours.

Somewhere along the line, I got tired of unwrapping and rewrapping the fillet sandwich, so I had the brilliant idea of just cutting it in two pieces so it would fit into two one-gallon ziplock bags: 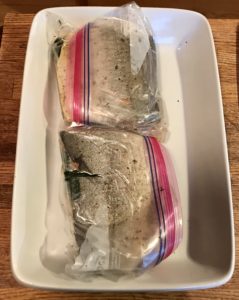 Since I'm just making this for myself to have for breakfast, this had the added advantage that I could just open one bag at a time, leaving the other to continue to cure.

After at least 48 hours, remove the fish from the accumulated brine, toss out the dill (you could save a little to use as a decorative garnish), and scrape off the spice rub.  I first put the fillet sandwich in the fridge on Monday morning, February 12th.  It's now Friday morning, February 16th, so the first bag that I opened had cured for four days, or 96 hours.

Put a fillet skin side down on a cutting board, and starting at the smaller tail end, use a fillet knife to make thin slices at a slant, like this: 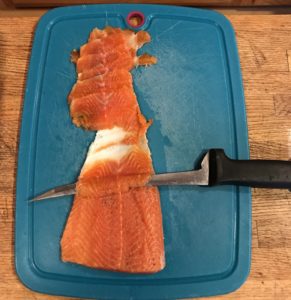 Serve with rye or pumpernickel toast points and a sauce made from 1.5 tsp dry mustard, 1 cup mayonnaise, 1/4 cup chopped fresh dill, 2 T dijon mustard, 1 T fresh lemon juice,  and 1 T gin (this will be enough sauce for fish with a starting weight of 2 to 3 pounds): 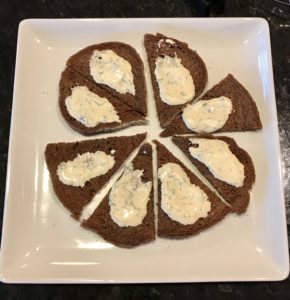 A nutritionist once told me that we should eat breakfast like a king, lunch like a prince and supper like a pauper.  This certainly qualifies as a breakfast for a king!

Gravlax also makes a fantastic hors d'oeuvre for a party, when it is best served with ice cold vodka, neat.  Here's a picture of a previous batch all dressed up and ready to party: 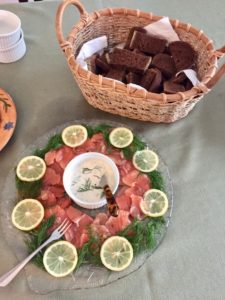