I am closing in on the Grail.  I made a Curried Pumpkin Mussel Soup today that was the closest yet to that bowl I had in Montmartre.

I had the inspiration last night of using whatever pumpkin that chef in Paris had used.  So I asked one of the staff at Scott’s farm stand in Old Saybrook, which has an amazingly diverse range of pumpkins on offer (see photos in my “Pumpkins Everywhere!” newsletter), what he thought.  He suggested this “Cinderella” pumpkin, which is a French variety: 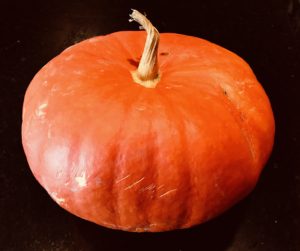 This was as intensely an orange pumpkin as any I’d ever seen.  I was hoping the pulp would also be orange (versus yellow) in color.  Alas, this was not to be: 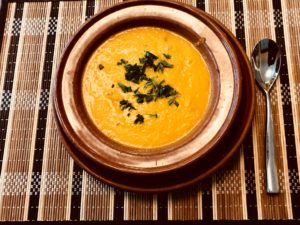 But the flavor and the texture was just right. Here’s how I did it:  Baked a 6 pound whole pumpkin uncovered on a baking sheet in the oven for an hour.  Allowed it to cool, then cut in half, and took out the seeds and threads, peeled and chopped it.  Weighed 3.75 pounds after seeding and peeling.  Steamed the mussels for just 3 minutes in a broth of a whole bottle (4 cups) of white wine, olive oil, onion, garlic and thyme, which I strained and used as the only liquid in the soup.  Shelled the mussels right into the soup bowls, handling them as little as possible, which as a result were soft and plump at the end.  Sauteed an onion for 5 minutes in olive oil, added the chopped, cooked pumpkin and cooked slowly, covered, for 5 minutes more, added the strained broth and simmered, covered, for another 5 minutes.  Pureed the soup with an immersion blender.  The consistency was just right, neither too thick or too thin.  Because I didn’t need to add any fish stock to thin it, I got the intense mussel broth flavor and an intense pumpkin flavor.  Added about 1 tsp each of curry powder and cayenne pepper.  Reheated the soup to be piping hot.  Corrected seasoning and finished with the juice of one lemon.  Ladled the soup over the mussels in the bowls.  Garnished with chopped tarragon.  Sharon Moliere, a discerning taster, deemed it a smashing success.

I will go back to a regular sugar pumpkin to try to get a deeper orange color, but will use the other methods I have discovered with this and my past attempts.

3.75 pounds pumpkin, baked, peeled and cut into chunks…to get this much usable pulp you need to start with a 5-6 pound raw pumpkin, depending on the amount of seeds and threads, and how much of the peel you remove.

Pierce the pumpkin a few times with a carving fork, and bake the pumpkin on a baking sheet for 1 hour until the pumpkin is tender.  Allow to cool, then cut in half and remove the seeds and threads, and the tough bottom and the stem.  Peel and cut into chunks.  Weigh the pumpkin at this point, and adjust the amount of broth as necessary with the ratio of 3.75 pounds of cooked pumpkin to 4 cups of wine.

Heat the oil over high heat in an 8-quart stock pot.  Add the 2 onions, garlic, thyme, and wine.  Bring to boil, add mussels and cover.  Cook the mussels until they just begin to open.  Check at 3 minutes, and then every minute.  Be careful not to overcook, as the mussels will shrivel up.  Discard any mussels that haven’t opened (and find another fish store if you do).  Remove the rest of mussels from the steaming pot so they don’t keep cooking and allow to cool, then pull them from their shells, trying not to break them, and place in soup bowls.  Strain and reserve the steaming liquid, as this will be the heart of the soup.

Saute 1 onion in olive oil in a 4 to 6 quart pot for 5 minutes.  Add pumpkin, cover and cook over low heat for 5 minutes more.  Add liquid used to steam mussels, cover and simmer for five minutes more.  Puree with an immersion blender (or puree in batches in a food processor).  If you minded the proportions of pumpkin to broth above you should end up with a soup that is just right, neither too thick or too thin.  If you’re not sure, add about 3/4’s of the broth and puree it, and check consistency.   Then add the rest if you need to.  If it’s too thick, add some fish stock (hope you don’t need to do this as this will dilute the intensity of the broth, which is the key to the soup).  ,Add curry powder and cayenne pepper.  Reheat as necessary so soup is piping hot.  Taste.  Adjust seasoning (it will probably need salt), and finish with the lemon juice.  Ladle soup into bowls over the mussels.  Garnish each bowl with some of the tarragon.