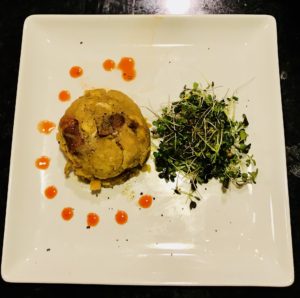 That's what my daughter Liz calls Mofongo..."Food of the Goods."  Every bite packs a punch of fried plantain, crisp bits of chicharrón (crackling), garlic and olive oil.  It's kind of the turkey sandwich of Puerto Rican food, as I suspect it grew out of leftovers from a feast of Pernil (see my blog, Recipe for Spiritual Bliss).  And just as there are people who will roast a turkey just so they can have leftover turkey to make turkey sandwiches, I made Pernil yesterday primarily so that I would have leftovers with which to make Mofongo.  You can make it into small balls, or large ones like I did above.  I garnished it with dabs of hot sauce and some Trifecta Ecosystems microgreens, which in today's CSA were a mix of arugula, pac choi and beet.  I dressed them with some extra virgin olive oil and salt and pepper.

Here's how to make the Mofongo (this is from Valldejuli's Puerto Rican Cookery):

Peel and cut into 1 inch diagonal slices, 3 medium or 2 large green plantains.  Fry the plantain once for 10 minutes (Valldejuli says 15 minutes, but I think that's too long and the plantains get too dry) in 300F oil (first heat the oil to 350F, add plantains, then reduce heat to 300F): 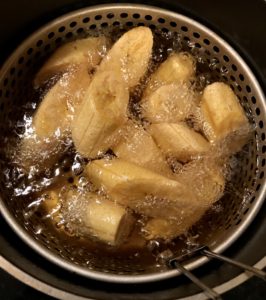 Cut the skin off the roast Pernil (to yield about 1/2 pound total, topping up with some of the Pernil meat if necessary), cut into smaller pieces and fry till really crisp: 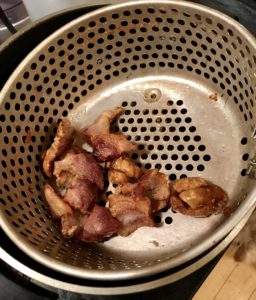 Pound 3 peeled cloves of garlic in a mortar, and mix with 1 T of olive oil: 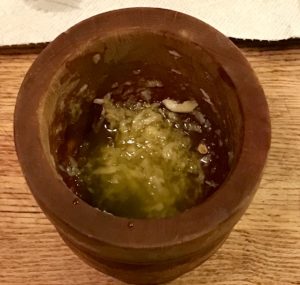 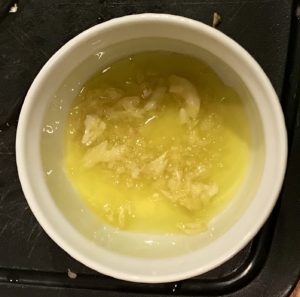 Chop the chicharrón and fried plantains into smaller pieces to make it easier to smash them in the mortar: 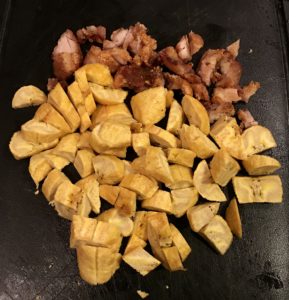 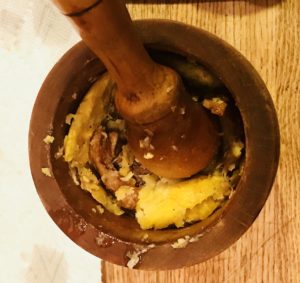 Then mix with half of the olive oil and garlic.  Repeat with other half.  Form into 10 small balls, or a smaller number of larger ones, as shown at top.  Eat like a god.

1 thought on “Mofongo: Food of the Gods”