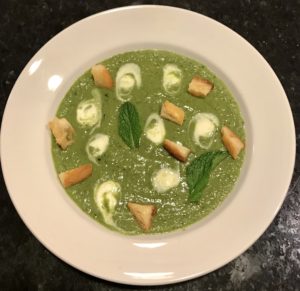 I had been wondering what to do with some leftover lettuce from last week when I picked up my new CSA from Trifecta Ecosystems on Monday.   This Potâge St. Germaine recipe was the answer. It uses fresh peas, lettuce, leeks, mint and chicken stock, garnished with a little crème fraiche and croutons. That’s right. Lettuce in soup!

There are versions of Potâge St. Germaine that use green split peas, typically garnished with a little sherry, as popularized by the Magic Pan restaurant back in the day. I plan to make that version, at some point. The vivid green of this fresh pea version made me think of St. Patrick’s Day, and making it is so much better than having to slog through corned beef and cabbage, which my mother made for St. Patrick’s Day, and which I might have been tempted to make for sentimental reasons, even though I don’t much care for it.

My mother thought of herself as Irish, at least on St. Patrick’s Day. Somehow, she confused me into thinking she was Irish Catholic, when in fact, the Irish part of her wasn’t Catholic (rather Anglo-Irish and Scots-Irish) and the Catholic part of her wasn’t Irish (rather Alsatian). I was probably 25 before I figured all of this out, living in a Hartford neighborhood of Irish-American Catholics, with a bunch of NORAID activists for my friends and political allies. At the time I felt a little squeamish having to admit that I was actually an Orangeman, but it does free me now from having to cook corned beef and cabbage. I can just do my own riff on the Day, like anyone else who is not an Irish-American Catholic (I don’t think the Irish in Ireland actually cook corned beef and cabbage).

This recipe comes from these two online sources:

These are the assembled ingredients for the soup: The only problem with the picture above is that the amount of peas was 1/4 what I needed to make 4 cups, which I didn’t realize until after I shelled them.  Here was the yield, just 1 cup: 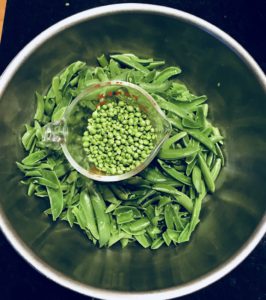 So I just reduced all of the other ingredients and made one bowl of soup instead of four.  Will make the rest once I plow the driveway so I can get out to buy some more peas.

Here’s the step by step:

To make croutons, toss 1 ½ cups of cubes from French bread in 2 T melted butter, then bake at 350F for 10 min. Season with salt.  I made these before I shelled the peas, so had a lot more than I needed for one bowl.  No worries, as the croutons store well. 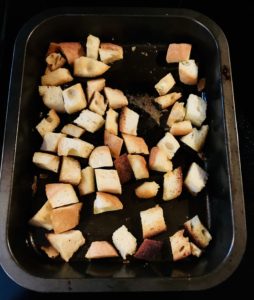 Slice the white part of 2 leeks. Put in a bowl of cold water to soak and release any grit.  Lift leeks out of water and dry in a towel. In a large saucepan, sauté the sliced, cleaned leeks in 2 T butter, stirring occasionally, till softened. I started sautéing the leeks before I shelled the peas, so I ended up just using 1/4 of the leeks I sautéd.  Normally you add 3 cups of chicken broth and 2 cups of water to the leeks at this point and bring to a boil.  But I just added 1 1/4 cups of chicken broth: 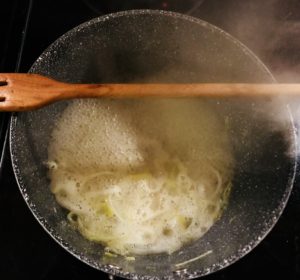 At this point you would add 4 cups of peas and four cups of lettuce and simmer, partially covered, for 10 minutes, or until peas are tender, but since I only had 1 cup of peas, I only added them and 1 cup of lettuce: 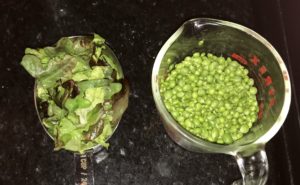 Season with salt and pepper.  Ladle the soup into bowls and garnish with croutons, crème fraiche, and a couple mint leaves:

So I plowed my driveway this morning and went to Stop and Shop to get more peas.  Alas, no pea pods to be found.  But wait!  Some shelled peas!

Now it turns out that the peas I shelled from the pod yesterday were Snap Peas, aka Sweet Peas, whereas the shelled peas I bought today were English Peas.  Not being a pea fan generally, I am learning these distinctions as I go.  The soup I made today was a bit less sweet than the batch I made yesterday with the Snap Peas, but still pretty similar, which probably means the shelled pes were really fresh (see comment at bottom of this blog).  I had already done most of the work yesterday, so making this second batch was a breeze.

I reheated the rest of the sliced leeks that I had sautéd in ghee yesterday: 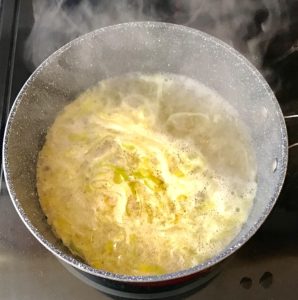 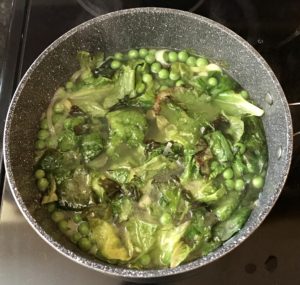 Then added 3/8 cup of mint leaves and blended in two batches in a real blender, ladled some into a bowl, seasoned with salt and pepper, and garnished with crème fraiche, croutons, a mint sprig and some fresh pea pods: 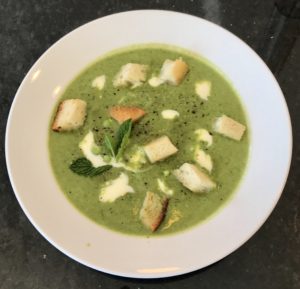 There is a lot more crème fraiche in there than meets the eye, as much of it sank, rather than floating on the surface of the soup, as this batch came out a little thinner than yesterday’s for some reason.  NOTE: This soup benefits from a lot of crème fraiche. At least 1 T per bowl.

The second batch was as delicious as the first batch.  I have a couple bowls of the second batch left over, so will be interesting to see how it reheats.  May add a tsp or so of maple sugar, as I think it could be a tad sweeter, and that would qualify it for Mapleloosa.

I think this dish epitomizes spring and perishability, as fresh peas are in a race against time: as is the case with the kernels in a ear of fresh corn, the sugar in the peas in a fresh pod starts turning to starch as soon as the pod is picked.