I bought two celeriac (celery root) at the last OS Farmers Market a couple of weeks ago.  The farmer I bought them from said that they would store well, and suggested that I might use them to make celeriac potato pancakes.  I found a great recipe at  Serious Eats. You can find it via this link: 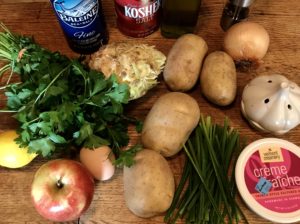 Sauteing the Onion and Garlic

You saute onion in 1 T olive oil over moderate heat in a large skillet for 2 min, then add 1 minced garlic clove and cook for 5 min more, till translucent but not golden: 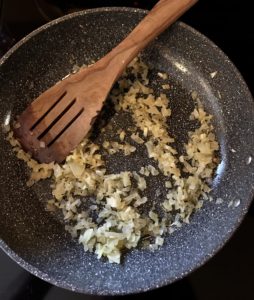 Grating and Prepping the Celeriac and Potatoes

You peel and grate the celeriac and potatoes, then put them into a kitchen towel and twist hard to squeeze out as much water as possible: 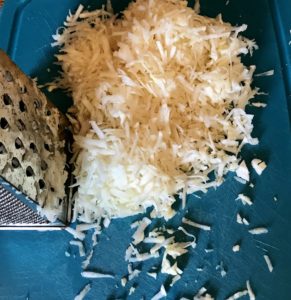 You then combine the dried celeriac/potato with 2 T chopped parley and the onion/garlic to mix thoroughly, then add 1 egg and mix lightly.  Then you heat 2 T olive oil over medium heat in the same skillet you used to saute the onion and garlic.  Add half of the pancake mix and press flat across the bottom of the skillet, cook for 15 min at medium heat, then put a plate on top, invert the pancake onto the plate, then slide the pancake raw side down back into the pan, and then cook for another 15 min.  Repeat with the other half of the pancake mix.

Here the pancake has been cooking on the first side for 15 min and is ready to flip: 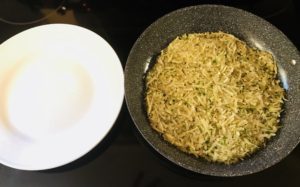 You invert a plate on top of the pancake like this: 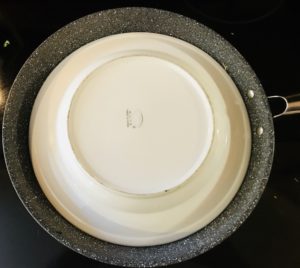 The flip the plate and the skillet over so the cooked side is up, like this: 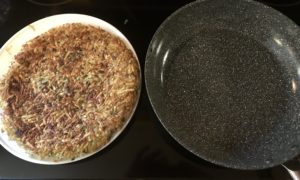 Then you slide it back into the skillet raw side down, like this: 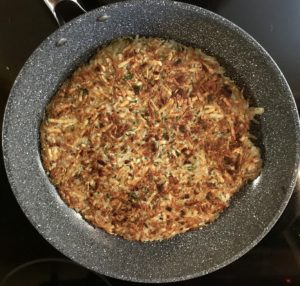 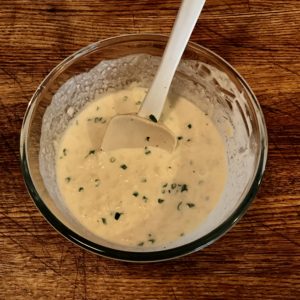 Put a wedge of the pancake on a plate and top with some of the sauce: 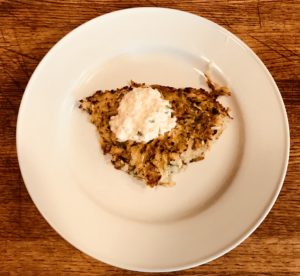 This was really good.  Crisp on the outside, soft and tender on the inside.  The celeriac gives it a richer flavor than regular latkes (potato pancakes).  The sauce is perfect for those who can't decide whether to have their potato pancakes with apple sauce or sour cream, as it uses both.  I love the nutty flavor of creme fraiche.  It's what sour cream wants to be when it grows up.

NOTE:  The skillet I used to make this was my new Vesuvio from DaTerra Cucina, which makes ceramic-coated, nonstick cookware that is PTFE/PFOA-free.  It is perfect for this kind of slow saute over medium heat.  Cooked the onions without browning and cooked the pancake perfectly crisp without any of it sticking to the pan.  Clean up was a dream.