I posted earlier this month about the cooking class I took in June at the Fig School in Hamden called Beyond the Sea.  I will be taking another class there on Saturday called Moroccan Spice Market.  That will be my third, as I also took a class in August called Summer Dinner in Provence.  Below are some photos of my attempt to reprise the recipes I learned in that class, which was another winner:

The Hors d'Oeuvre - Goat Cheese with Cognac and Toasted Pistachios on Crostini: 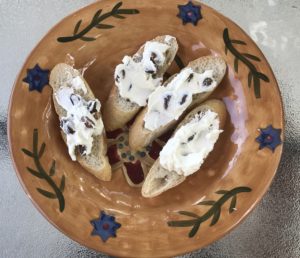 These are easy to make and delicious.  I made them for several parties over the summer. 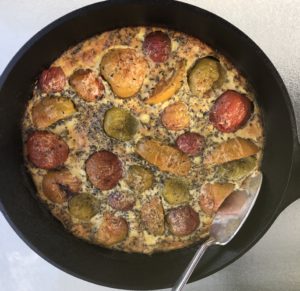 This is especially good when you can get heirloom tomatoes at the farm market, as in the above. I made my own Herbes de Provence spice blend for it.  Your kitchen is filled with the smell of those spices as it cooks in the oven.  Presents beautifully in the skillet that's used to cook it.  I made this several times over the summer, including at a gathering of my cousins at my sister's house in San Diego. 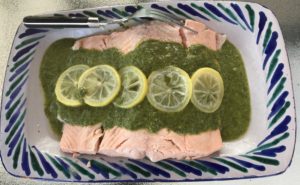 Probably the biggest challenge for me in making this was to find a skillet with a cover, where the skillet was big enough to fit the salmon, and deep enough to cover it with the poaching liquid. 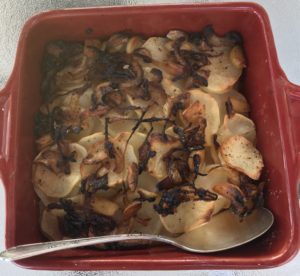 The theme of this meal was to keep it light, hence this cream-less potato gratin. 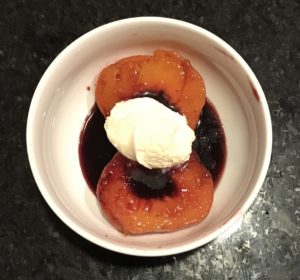 I used yellow peaches as white were no longer in season.

Here are the ingredients for the wine sauce, which is reduced to a syrup after poaching the peaches.  The recipe call for a whole bottle of wine! 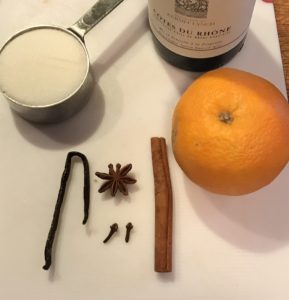